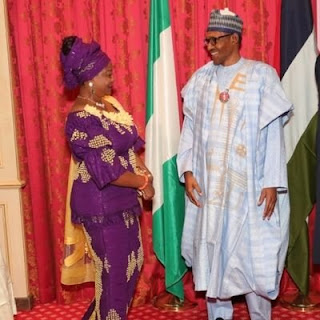 Nwaoboshi’s threat came even as the Senate is said to have directed security agencies to probe an alleged forged by the Deputy President of the Senate, Ovie Omo-Agege, seeking the investigation of the Minister of the Niger Delta Affairs, Senator Godswill Akpabio.

Nwaoboshi, in a letter to Onochie through his lawyer, gave her a 48 hour ultimatum to retract all disparaging comments allegedly made against him as regards contracts from NDDC or face imminent litigation.

The solicitors who are Bwala and Co of the Crystal Chambers and Daniel Hassan Bwala of Lincoln’s Inn London, in the letter dated 9th June, 2020 and addressed to Mrs. Onochie, listed all her alleged infractions against Nwaoboshi.


“Our Client informed us and we verily believe him that on the 8th day of June 2020, you posted/published a defamatory article on your Facebook page (Lauretta Onochie) against our client captioned “NDDC- THE CHICKEN COMES HOME TO ROOST” appearing on your page as follows, amongst other:

“I was at an event in his home town when he spoke in our Anioma language, declaring himself a thief. I am an Ada Anioma. I was raised in Anioma land. We do not take what belongs to others, let alone pride ourselves in being thieves.

“The question Senator Nwaoboshi has refused to answer is to tell Niger Delta citizens and Nigerians his role in the award of contracts for the provision of 4,800 plastic desks and chairs for primary/secondary schools in nine (9) states of the Niger Delta in 2016 with award of contract letters dated 22nd September, 2016.

“The contract sum was for N3.6 Billion Naira. The revelations in the award of the said contract are mind boggling, disturbing and appalling, using eleven different companies and business names which were awarded the contract are owned by or traceable to one and the same person being Sen. Peter Nwaoboshi.

“That our client believes that this publication by you against him is meant to ridicule his image all because you occupy an important position in the government of President Buhari in relation to social media. so that whatever you posted or shared should be taken as the position of the President and therefore your post/publications would be believed by others.

“Consequent upon your unsubstantiated allegations against, our client, he demands that you publish/post a retraction on all your social media platforms and tender an unreserved apology to him within forty eight hours from the day of delivery of this letter.

“Take note that if you fail to comply with the demands as stated above, we have our client’s instructions to take legal action against you without further recourse to you.

A stitch in time saves nine”, the letter read in part. 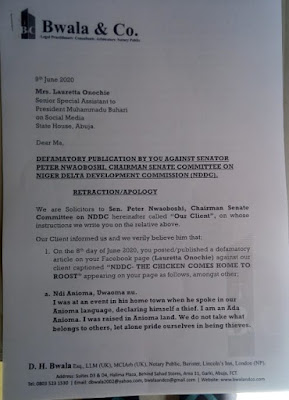 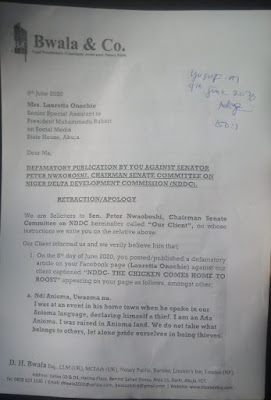 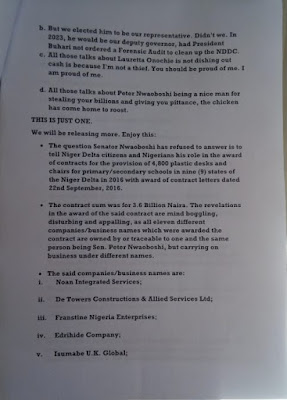 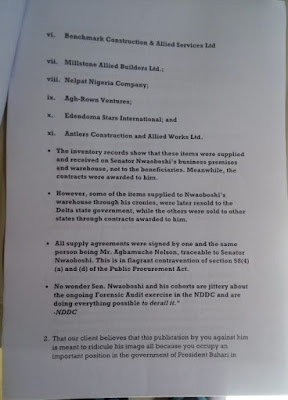 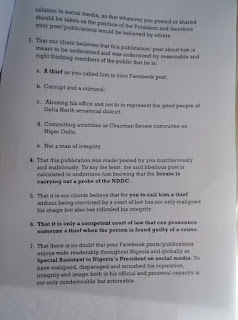 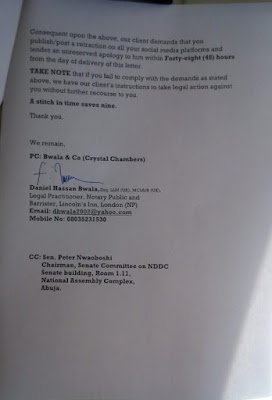