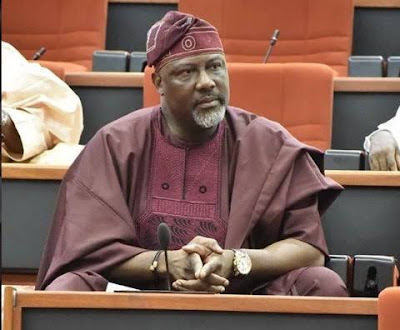 Justice Olasumbo Goodluck of an FCT High Court, Maitama on Tuesday discharged Sen. Dino Melaye who was accused of providing false information to the police.

The Attorney-General of the Federation (AGF) charged Melaye with two counts of giving false information to the police.

Delivering a ruling in a no-case -submission filed Melaye, Justice Goodluck held that on count one, there is no evidence that the defendant gave false information to any person in public service.

She also described the evidence given by PW1 (Onoja) as “vague”.


The judge said:” neither of the two witnesses elicited evidence on the status of Mohammed Abubaker Audu.”

“Hence, there is lack of evidence on the nature of the status of employment or if at all he is employed not to talk of him being engaged in public service,” she said.

“I am also inclined to allude to the submissions of the defence counsel that there is no statement before the court allegedly made by the defendant to one who is in the public service.

“This being the case, the first ingredients of the offence upon which count one is predicated has not been proved to the court.

“Similarly, the second element of the count has not been proven by the prosecution”.

Goodluck held that the prosecution failed to present the audio recording of the conversation between the former Maleye and Audu, nor was an audio expert engaged to the ascertain the identities of the persons in phone conversation.

She further held that no staff of Sahara reporters, the online medium which allegedly released the audio conversation, was called to testify.

The judge also held that no investigative police officer was called to prove that indeed a report was lodged against the defendant.

“It is no longer uncertain that a court does not rely on speculations and suspicions from any material evidence.

“No audio recording of the telephone conversation between the defendant and Mohammed Abubakar was presented at trial.

“All we are left with is the hearsay evidence of the existence of the statement as recounted by the witnesses.

“Besides, the prosecution failed to call in evidence, the Sahara reporter to establish through his staff that the Sahara Reporters recorded a telephone conversation involving the defendant and another.

“In effect, there is no credible and cogent evidence of any Sahara Report’s recording before this court.

“In the light of the fore going consequences, I am of the view and will so hold that the defendant ought to be discharged as there is no reason to convict him in the circumstances.

Melaye was alleged to have in April, 2017, deliberately given false information to police to incriminate David Onoja, then Chief of Staff to Kogi State governor, as masterminding an assassination attempt on him.

He was also alleged to have given false statement of facts in a phone conversation with Mr Mohammed Abubakar, son of former governor of the state, Abubakar Audu, with the intention of harming the reputation of Onoja.

He, however, denied committing the offence punishable under Sections 140 and 393 of the Penal Code Law, Cap. 89, Laws of Northern Nigeria, 1963.