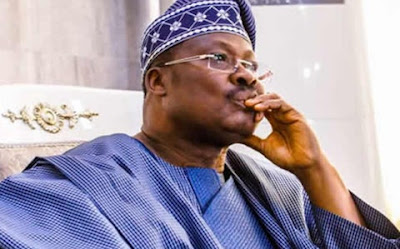 The Publicity Secretary, All Progressives Congress in Oyo State, Dr. Abdulazeez Olatunde, said on Saturday that former governor Abiola Ajimobi would resume duty as the acting National Chairman of the party as soon as practicable.

Olatunde spoke in a telephone interview with our correspondent, on Saturday.

He described as misrepresenting, a statement credited to him by some online news platforms that the ailing former governor would be sworn in as acting National Chairman of the APC next week.

He also dispelled the rumour that there was a crisis within the party over the decision of the National Working Committee to appoint Hilliard Eta to act on behalf of the ailing Ajimobi.


Ajimobi was until his new appointment the APC’s Deputy National Chairman (South).

Olatunde said, “Ajimobi is the Acting Chairman. For one reason or the other, he is not available now. He is going to be available very soon; it could be next week, upper week, or anytime. When he is okay, he is going to resume.

“There is no crisis in our party. Etta is the one acting on behalf of our leader, Abiola Ajimobi.

“By the grace of God, you know the ultimate power belongs to God, but I can assure you that our leader, Senator Abiola Ajimobi, will resume office as the acting National Chairman very soon. He is recuperating.”

It will be recalled that the rumour of Ajimobi’s death went viral on Thursday but was later debunked by Bolaji Tunji, Media aide to the former governor.