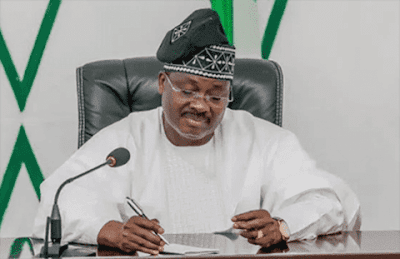 There was great apprehension in Ibadan, the Oyo State capital, over the state of health of the immediate past governor, Senator Abiola Ajimobi.

Some minutes past 8pm on Thursday, there were rumours that his health had further deteriorated which prompted so many insinuations.

Even though several mushroom online media had pasted the news of his death, his aides, close associates continued dismissing the rumour.

When asked about his health from the Oyo State Chairman of the All Progressives Congress, Chief Akin Oke, he simply said the former governor was getting better and that his condition had improved considerably.


Some of his perceived political foes said they heard the news but could not confirm it.

This scenario dragged on till midnight when his former Special Adviser on Communication, Mr Bolaji Tunji and one of his children confirmed that the acting National Chairman of APC is hale and hearty.

After several phone calls, Mr Bolaji Tunji wrote on his Facebook account “My attention has been drawn to the rumours circulating on the social media about my principal. Kindly disregard. We, however, continue to pray for him. Thank you all for the show of concern.”

As a result, some of the online media which had hastily posted the news of his death had to pull down the story.

As of this morning, nothing in the Oluyole residence of the former governor suggests anything happened to him.