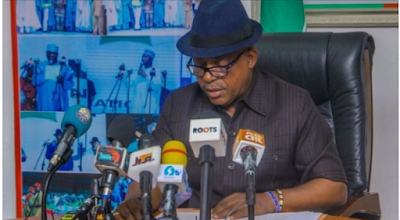 The Peoples Democratic Party (PDP) has postponed its gubernatorial primary election in Edo state for the second time in 24 hours.

On Thursday, the party had announced that the exercise initially scheduled for June 19 had been moved to June 23.

But in a statement on Friday, Kola Ologbondiyan, the party’s spokesman, said the primary election has now been shifted to June 25.

“The NWC in exercise of the above powers has ratified the application for waiver by the ward, local government and state executives of the party in Edo State and accordingly grants waiver to His Excellency, Governor Godwin Obaseki to enable him contest the gubernatorial primary of the PDP.

“Also the NWC has further shifted the Edo State Governorship Primary from an earlier slated date of Tuesday, June 23 to a new date of Thursday, June 25, 2020. The shift is again predicated on exigencies of party activities.”

The announcement was made hours after Godwin Obaseki, governor of Edo, was granted waiver to contest the primary.

Obaseki, who was elected on the platform of the All Progressives Congress (APC), had defected to the PDP, following his disqualification from the APC governorship race.