2023: Igbo presidency not a joke, no going back – Jim Nwobodo 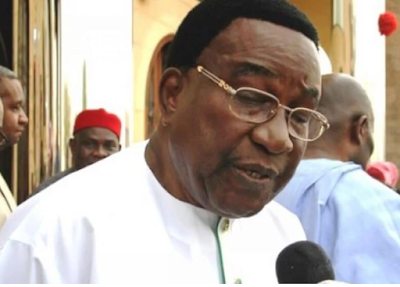 Nwobodo spoke in his Amaechi country home when a chieftaincy title was bestowed on him by the Amurri Ancient Kingdom.

The title was bestowed on him by Dr. Ben Nwoye, the Enugu State Chairman of the All Progressives Congress, APC, and crown Prince of the Amurri kingdom, on behalf of the community.

He led a delegation of other cabinet members to Nwobodo’s residence on behalf of the Amurri community and their traditional ruler, His Royal Highness, Igwe Charles Nwoye.

There has been clamour for a power shift to the Southeast at the end of President Muhammadu Buhari’s tenure in 2023. However, the Southwest is also believed to be positioning for the slot.

But Nwobodo is insisting that for justice and equity, Igbo presidency must come to fruition in 2023.

“It is time for Igbo presidency, at 80 I can say anything, nothing to be afraid of again.

“We are not joking about it, I’m serious about it. 2023 is the turn of Southeast to produce presented of Nigeria,” he declared.

The elder statesman stressed that “the country is sitting on a tripod and Igbo can’t be relegated to the background.”

While calling for political tolerance, he said, “We are all one irrespective of political affiliations, whether APC or PDP, I see everyone as brother.”

He said the chieftaincy title, ‘Eziokwu Bu Ndu of Amurri’ (Truth is life), meant so much for him.

“I will value the title, I cherish it so much because I’m known to always say the truth no matter the situation,” Nwobodo said.

Earlier, Nwoye said the community gave the title to Nwobodo owing to his stand for the truth and the enduring legacies he put in place while in government, especially in the area of education.