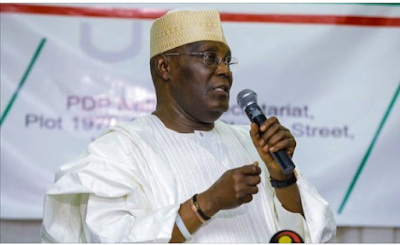 Ohanaeze’s Deputy Publicity Secretary, Chuks Ibegbu in a chat with Dailypost said Atiku should support Igbos in producing Nigeria’s next president, rather than contesting again.

Ibegbu was reacting to remarks by Atiku’s son, Abubakar Adamu that the former Vice President would run for Presidency again in 2023 after previously failed attempts.

Adamu, who is the Adamawa State Commissioner for Works and Energy had said: “In 2023, my father will be aspiring to the number one office in the land because he has been an astute, strategic, master politician for almost four decades.”


Reacting, Ibegbu said Atiku was at liberty to contest for presidency in 2023.

He, however, expressed hope that Atiku will see reasons and support the Southeast in its quest to produce Nigeria’s next president.

According to Ibegbu: “We are practicing democracy and every Nigerian is free to aspire to be president of the country including me as long as they are qualified.

“However, the issue is that we are talking about fairness, equity, and justice. The North has had its fair share, the South also have had their’s, so it’s now the turn of the Igbo’s to have their fair share.

“So for justice, equity and fair play, it’s the turn of the Igbos to produce Nigeria’s president.

“My friend Isa Funtua once said Nigeria’s presidency is not turn by turn but it’s not true. Since 1956 till now it has been turn by turn, the North, Southwest, Niger Delta have had their turn now it’s the turn of Igbos.

“In as much as Atiku is free to advance his political course, but based on justice and equity, he should support the Igbos in producing Nigeria’s next president.

“We supported him in 2015, so this is the time to show statesmanship politics by supporting us.

“In case he contests but I think his conscience should direct him that it is not fair and justice enough for him to contest against us in case they are pushing him or he’s pushing himself.

“I believe Atiku will see reasons with us at the right time.”