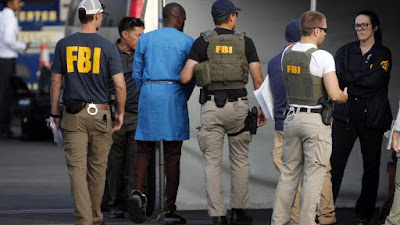 The United States government has arraigned 11 Nigerians over allegations of $6 million fraud.

This is contained in a statement issued by the US attorney’s office, District of New Jersey.

The suspects were accused of committing fraud in several states, including New Jersey, Pennsylvania, Maryland and Rhode Island, between June 2016 and March 2020.

Craig Carpenito, US attorney, said members of the group laundered the proceeds of the fraud by several means, including using debit cards to purchase money orders from third party stores and using those money orders to purchase used automobiles which were later sold in Nigeria and other African countries.

“The defendants are allegedly members of a Nigeria-based, multi-layered organization that engaged in a massive bank fraud conspiracy in several states, including New Jersey, Pennsylvania, Maryland and Rhode Island, between June 2016 and March 2020,” the statement read.

“Members of the group stole numerous business checks from the United States mail, altered the payee on the checks to a fraudulent name and deposited the checks in bank accounts that had been opened with forged foreign passport documents and fraudulent U.S. visas that matched the names on the stolen checks.

“Once the banks credited all or a portion of the funds to the accounts – but before the checks had cleared – the defendants withdrew the funds from ATMs or purchased money orders, using debit cards associated with the fraudulent accounts. Members of the organization have used over 400 fraudulent accounts with fake identity documents to defraud the banks.

“The organization also laundered the proceeds of the fraud by several means, including using debit cards to purchase money orders from third party stores and using those money orders to purchase used automobiles from different automobile auction companies in Pennsylvania. The vehicles were then exported to Nigeria and other countries in Africa to launder the stolen funds and to increase profits by selling the vehicles at the higher market values obtained for vehicles in these foreign countries.

“The bank fraud conspiracy count carries a maximum potential penalty of 30 years in prison and a maximum fine of $1 million.”

This development is coming just as the Federal Bureau of Investigation (FBI) has asked for assistance in finding six Nigerians who the US indicted for fraud.

The suspects aged between 32 and 37, “defrauded US citizens through the use of sensitive information and financial resources derived by manipulative means”.