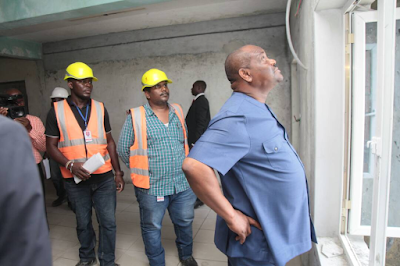 The Rivers State Government Wednesday announced the death of a member of its Taskforce on COVID-19 attacked by hoodlums at the demolished Prodest Hotel in Port Harcourt, the state capital.

The state Commissioner for Information and Communications, Paulinus Nsirim, who though did not mention the name of the victim, said he died from injuries he sustained during the incident.

Nsirim, who spoke in Port Harcourt, justified the actions of the state Governor, Nyesom Wike, saying the governor was combating the spread of the Coronavirus with the rule of law.

The commissioner said the governor approved the conversion of the demolished hotel site to a primary school to serve the people of the state adding that the opposition hijacked the demolition incident.


He said: “The latest issue that has been hijacked by opposition elements is the demolition of two hotels in Eleme, after they deliberately flouted Executive Order 6.

“These two hotels, Prodest Hotel, Alode, Eleme and Etemeteh Hotel, Onne not only flouted the Executive Order, the Hotel Manager of Prodest invited the wanted PDP Eleme Youth Leader, Princewill Osaroejiji, who came with thugs to unleash mayhem on Task Force operatives on ground to close down the facility.

“As we speak, one of the Task Force operative lost his life last night. Governor Wike and the Rivers State Security Council took the decision to demolish the hotel in the interest of Rivers State and her people. Days before that demolition, everyone was aware that the State Government sensitized the people on the consequence of flouting Executive Order 6.

“Having demolished that hotel, Governor Wike has approved that a primary school be constructed at that location to serve Rivers people. This is what a responsive government will do.

“The fight against coronavirus in the state has been premised on the Rule of Law. It was Governor Wike who first signed an Executive Order that led to Border Closure and other actions. This was done on March 19, 2020. After initial criticisms, other States followed suit.

“Therefore, the fight against coronavirus in Rivers State is in the interest of Rivers people and the entire Country. This is because Rivers State is vital to the survival of the nation as the headquarters of the hydrocarbon industry”.

Eleme people are happy with the demolition. In several publications they made after the demolition, they have declared that Prodest Hotel is a criminal hideout and a den for cultists.

He said: “One question many social media lawyers and their followers have refused to answer is, why is that out of several hotels operating in Rivers State only Prodest and Etemeteh hotels were demolished.

“Even the Chairman of Nigeria Hotels Owners Association Rivers State Chapter, Mr. Eugene Nwaizu, in a statement issued in Port Harcourt expressed surprise that the hotels that were not even registered with the body disobeyed the Executive Order.

“According to him, the Hotels and Guest Houses were well informed about the Executive Order. The Governor is not out to witch-hunt anybody but to ensure that coronavirus does not spread in the State.

“However, seasoned legal luminaries like Chief OCJ Okocha (SAN) have said that Governor Wike acted within the law under the present circumstances. We are saying, rather than mislead members of the public; those aggrieved should approach the courts for interpretation”.

Saying that Rivers was not a lawless state, Nsirim noted that the governor would not be distracted by ill-mannered politicians struggling for media space.

“The Rivers State Government will remain focused. It will not be distracted by these unfortunate schemes by ill-mannered politicians, struggling for political space at the expense of their people.

“For Rivers State, the demolition of the two hotels was carried out in line with the prescribed Executive Order known to all hoteliers in the State. It was also done to protect officials of the Rivers State Government who are implementing the Executive Order. No Government will allow its officials to be killed by thugs whilst they carry out lawful directive”.