We’ll spare no cost to protect you – Buhari assures Nigerians 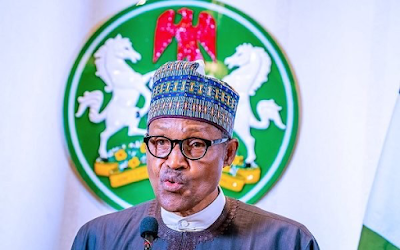 President Muhammadu Buhari has reassured Nigerians he would not spare any cost in his resolve to see that peace and security are achieved across the country.

This was the assurance he left with members of the National Security Council (NSC) during Thursday meeting he had with them at the State House.

He added he would redouble efforts to ensure Nigerians get their constitutional right as regards security.

Relating the President’s message while briefing State House Correspondents after the meeting, the National Security Adviser, Major General Babagana Monguno (Rtd.), also said he briefed the Council of the challenges facing the country, ranging from the terrorism in the Northeast, to banditry in other parts of the country as well as the rising cases of kidnapping.


Delivering the President’s message, Monguno said: “Mr. President noted all the issues raised and of course in due time he will be able to address these issues.

“Arising from this meeting, I will like to assure all Nigerians that Mr. President is fully on board, he is committed to doing whatever is necessary to reduce the spate of violence and insecurity in the country.

“He is also committed to spending whatever resources he has at his disposal to bring to a quick end to all the issues affecting Nigerians and bringing a lot of sorrows to Nigerians. That is the most important takeaway from today’s meeting.

“Mr. President’s reassurance that issues are being addressed and that he will redouble his effort in ensuring that the primary responsibility of government, which is to ensure the safety of lives and property, is realized,” he said.

He said the meeting kicked off with a briefing by the Secretary to the Government of the Federation (SGF) Boss Mustapha on the gains made so far, highlighting areas of concern, areas which need to be addressed as well as making projections for the next couple of weeks.

He also said in his capacity as the NSA, he gave briefings that revolve around the insurgency in the north east, armed banditry and emergence of all kinds of groups that are not essentially bona fide, as well as kidnappings which has been on the increase in recent times.

“I, as national security adviser, presented a couple of memos to council in relation to the current security challenges faced by Nigeria and of course these are issues that revolve around the insurgency in the north east, armed banditry and emergence of all kinds of groups that are not essentially bona fide.

“I also highlighted other issues that are related to the problems of kidnapping which we noticed has been on the increase in recent times.

“But the most important thing is that I stressed to Council that there is a need for collective action, not just for the security agencies, but by all ministries, departments and agencies of governments, civil societies organizations and all non-governmental Organisations within Nigeria”, he said.