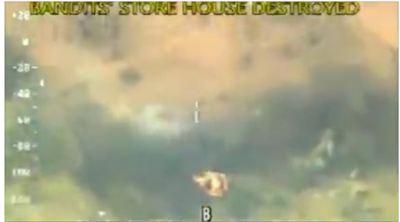 The defence headquarters says the air component of operation Hadarin Daji has destroyed bandits’ logistics store and killed no fewer than 30 gunmen in air strikes.

The strikes were conducted on Tuesday in Doumborou forest area of Zamfara state.

John Enenche, coordinator defence media operations, in a statement, said the operation was executed based on credible human intelligence (HUMINT) indicating that a thatched structure within the forest was being used by the bandits to store their items.

“Fortuitously, an intelligence, surveillance and reconnaissance (ISR) aircraft on patrol spotted some of the armed bandits on motorcycles who were tracked to the storehouse where they lodged some items,” the statement read.

“The air component therefore dispatched an attack helicopter to engage the location, scoring accurate hits resulting in the destruction of the store, which was seen engulfed in flames. The attack helicopter subsequently trailed the armed bandits who fled the location and mopped them up in follow-on attacks, neutralising no fewer than 30 of them as later confirmed by HUMINT sources.

“The chief of the air staff (CAS), commends the air component of Operation Hadarin Daji for their professionalism and directs them to remain resolute in the conduct of air strikes whilst continuing to provide close air support for ongoing ground operations in order to eradicate all armed bandits; thus achieving the directives of the chief of defence staff (CDS) of restoring normalcy in the north-west and north-central zones of the country.”

The military has continued to record success in the fight against bandits and Boko Haram insurgents.