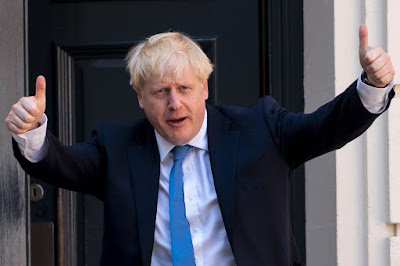 Britain’s coronavirus lockdown will stay in place until at least June 1, Prime Minister Boris Johnson said on Sunday, as he unveiled cautious plans to lift restrictions imposed seven weeks ago.

“This is not the time simply to end the lockdown this week,” he said in a televised address but added that some primary school children could return and shops re-open from June 1.

The government has come under pressure to outline its exit strategy from the lockdown.

Britain has seen nearly 32,000 deaths in the outbreak — the second-worst cumulative death toll behind the United States, and the worst in Europe.

But despite passing the peak of the outbreak, Johnson said it would be “madness” to waste the sacrifices the public had made since the lockdown.

Further details of what he stressed was a “conditional plan” would be outlined in parliament on Monday, he said.

It centres around a five-phase Covid Alert Level similar to the system in place for security threats, with one the lowest and five the highest.

Johnson said Britain had been at level four throughout the outbreak and “careful steps” were needed to move to level three, even as transmission rates varied around the country.

As a first step, the new guidelines again urge people who can to work from home but those who cannot to maintain social distancing and avoid public transport.

Johnson said there would be some easing of restrictions from Wednesday, allowing “unlimited exercise”, sport and sunbathing, but only within households.

“In step two, at the earliest by June 1, after half-term, we believe we may be in a position to begin the phased reopening of shops and to get primary pupils back into school, in stages, beginning with reception (age four to five), year one (age five to six) and year six (10-11),” he added.

In step three, “at the earliest by July… we will hope to reopen at least some of the hospitality industry and other public places, provided they are safe and enforce social distancing”, he added.

Johnson indicated restrictions could be reimposed, including locally, if there is a surge in cases.

“We have been through the initial peak but it is coming down the mountain that is often more dangerous,” he added.