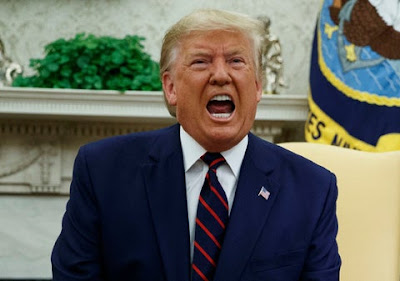 US President Donald Trump is expected to sign an executive order Thursday after threatening to shutter social media platforms following Twitter’s move to label two of his tweets misleading.

After long resisting calls to censure Trump over his truth-defying posts, Twitter on Tuesday accused the president of the first time of making false claims.

Trump had tweeted — without any evidence — that more mail-in voting would lead to what he called a “Rigged Election” this November.

Twitter’s slap on the wrist was enough to drive Trump into a tirade — on Twitter — in which he claimed that the political right in the United States was being censored.


Trump would sign an executive order “pertaining to social media” on Thursday, his aides said, without offering any details.

But an undated draft version of the order obtained by The Washington Post on Wednesday said: “we cannot allow a limited number of online platforms to hand-pick the speech that Americans may access and convey online.”

The order would make it easier for federal regulators to argue that the companies are “suppressing free speech when they move to suspend users or delete posts,” The New York Times reported, citing two senior administration officials.

Both newspapers also reported that the order, which they said had not yet been finalized, could see tech companies such as Twitter, Facebook and Google held legally responsible for content posted on their platforms.

Twitter’s move to tag the president’s tweets comes after years of being accused of ignoring the president’s violation of platform rules with his daily, often hourly barrages of personal insults and inaccurate information sent to more than 80 million followers.

Facebook chief Mark Zuckerberg waded into the row, telling Fox News that his social network — still the biggest in the world — has a different policy.

“I just believe strongly that Facebook should not be the arbiter of truth of everything that people say online,” Zuckerberg said in a snippet of the interview posted online Wednesday by Fox.

“I think, in general, private companies, especially these platform companies, shouldn’t be in the position of doing that.”

Twitter founder and CEO Jack Dorsey fired back on Wednesday night, saying that his platform’s effort to point out misinformation did not make it an “arbiter of truth.”

“Our intention is to connect the dots of conflicting statements and show the information in dispute so people can judge for themselves,” he tweeted.

He doubled down on the new policy, writing: “Fact check: there is someone ultimately accountable for our actions as a company, and that’s me… We’ll continue to point out incorrect or disputed information about elections globally.”

Kate Ruane, at the American Civil Liberties Union, said that Trump has no power to regulate Twitter.

The constitution “clearly prohibits the president from taking any action to stop Twitter from pointing out his blatant lies about voting by mail,” she said.

For all his protests, Trump is a political giant on social media.

By contrast, his Democratic election opponent, Joe Biden, has only 5.5 million Twitter followers.

The claim that Twitter is biased against conservatives fits the White House narrative that the billionaire president is still an outsider politician running against the elite.

The row is also a useful smokescreen when Biden is homing in on widespread dissatisfaction with Trump’s handling of the coronavirus pandemic, which has left more than 100,000 Americans dead.

Polls consistently show Biden in a strong position, despite barely having left his home during weeks of social distancing measures — and his relatively meagre social media presence.