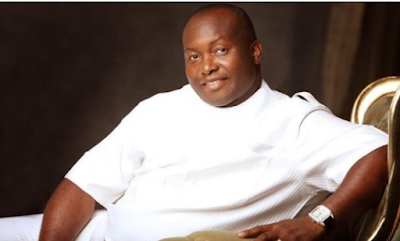 The supreme court has affirmed Ifeanyi Ubah as the senator representing Anambra south in the upper chamber of the national assembly.
In a unanimous decision on Tuesday, a five-man panel of the apex court led by Sylvester Ngwuta dismissed the appeals brought by Chris Uba, 2019 senatorial candidate of the Peoples Democratic Party (PDP) Obinna Uzor, challenging the election of Ubah.
The apex court held that FCT high court lacked territorial jurisdiction to determine a matter that arose from primary election conducted in Anambra state.
Ngwuta said the case ought to have been heard in Anambra where the cause of action emanated from and not the FCT.
Bello Kawu, judge of a federal capital territory (FCT) high court in Kubwa, had voided Ubah’s election on January 17, 2020, on the grounds that he presented a forged National Examination Council (NECO) certificate to INEC.
Dissatisfied the senator appealed the judgment of the high court.
Stephen Adah, who led a three-man panel of the appellate court, held that the judgment of the lower court was done without jurisdiction.
Adah also agreed that originating summons which birthed the judgment was not signed by any counsel as required by law.
Aggrieved with the decision of the appellate court, Uba and Uzor approached the apex court seeking an upturn of the judgment.
However, the supreme court in its decision quashed the appellants’ application and upheld the judgment of the court of appeal.
Reacting to the judgment, Ubah said he can now focus on his official duties.

“I thank the Justices of the Supreme Court for standing for truth and justice. This has once again shown that our justices cannot be intimidated. It is time to settle down to deliver quality representation to my constituents,” he said.