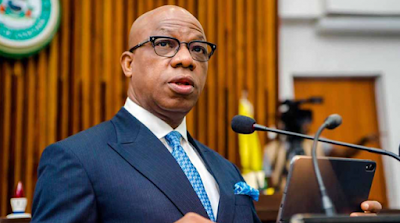 Recall that last week that the doctors said they were embarking on what they called ‘weekend strike’ until their demands are met.

In his plea, Gov Abiodun’s closest rival in the 2019 governorship election, Hon. Adekunle Akinlade, appealed to the doctors not to go on strike.

Akinlade also urged Abiodun to set its priorities as he would not be measured by the number of roads he constructed, but by his efforts in saving the lives of Ogun residents during this period of the Coronavirus pandemic.

But in a video obtained by NigerianEye, Abiodun said he was disappointed in the doctors for demanding wage increase at a time like this.

The visibly angry Gov Abiodun chastised the medical practitioners, saying they should be more concerned about people’s welfare than clamoring for money.

According to him, the doctors’ demand might have political inclinations.

He said, “I find it difficult to believe that when we are all putting our thinking caps on, trying to figure out what to do and how to do it, any set of people will be irresponsibly requesting for a wage increase. And these set of people are people that we have entrusted out health to at a point like this. I am very disappointed, I think, that is what I will say for now.

“I am beginning to wonder and it is being speculated that this may actually have political inclinations, these people may be politically sponsored. I am yet to believe it but at this point in time, anything is believable. If you see people who are educated, people who went to medical school, people who graduated, whose charge is to look after people, that is what they are charged for; that is what should be paramount to them not money, and we have done our best.

“That day, I authorised the use of PPE to them, face mask and everything. I increased their hazard allowance by 300%.”

In his veiled response to Akinlade’s advice that he should make the health sector priority at a time like this, Abiodun fired, saying:

“I read in some medium that someone said Gov Abiodun should better focus on the health sector against constructing roads and constructing schools. And I think it is a joke. People just at times talk without even thinking.

“In this country, we are ranked very high in our level of preparedness for this Covid. Like I said, we are only number four in testing in this country.

“I did not get a penny to acquire a laboratory. We did everything through self help. Our isolation centres are considered… WHO said what they saw in Ogun State was simply amazing and what we have done is definitely a legacy post-Covid; and then someone says to me that I am focusing on roads and schools that, I am not focusing on health care. Can you see everything is political?

“You know I am not in the habit of responding to baseless and frustrated people when they talk carelessly. But this time it is very painful when it borders on health.

“I don’t know what those doctors want, I am sure that other doctors are wondering what they want but I can assure you that we will not be subject to anyone’s blackmail. That’s all I can say.”