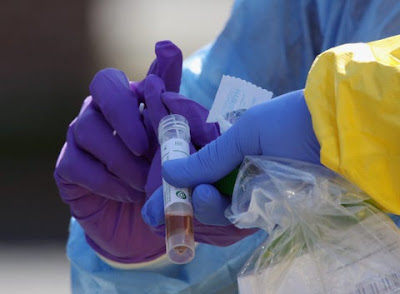 ‌
A South Korean man was jailed for four months on Tuesday for breaking coronavirus quarantine rules, authorities said, in the country’s first such prison sentence.

South Korea endured one of the worst early outbreaks of the virus – at one point the second-worst-hit nation after mainland China – but appears to have largely brought it under control thanks to an extensive “trace, test and treat” programme.

Life in the country is returning largely to normal and hundreds of thousands of South Korean pupils have gone back school after a delay of more than two months, in a process being closely watched as parts of Europe start to re-open.

The jailed man, 27, was arrested in April after breaking the quarantines rules twice.


He left his residence while under 14-day self-isolation and was then moved to a quarantine facility, where he was again caught leaving without permission.

The man was “convicted of violating the Infectious Diseases Control and Prevention Act, and was given four months in jail”, an official at the Uijeongbu District Court told AFP.

South Korean authorities are stepping up measures to try to prevent outbreaks recurring following a nightclub cluster earlier this month, and from Tuesday people are obliged to wear masks when using public transport and taxis nationwide.

In February, the country’s National Assembly passed a law imposing maximum sentences of one year in prison or a 10-million-won ($8,000) fine for deliberately breaking infectious diseases quarantine.

Officials in the East Asian nation of 52 million announced 19 new cases Tuesday, taking its total to 11,225.