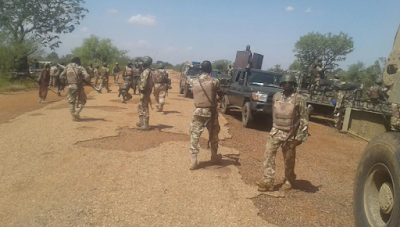 The Coordinator, Defence Media Operations, Maj.-Gen. John Enenche in a statement on Thursday in Abuja said the troops of Army Super Camp 11 Gambouru under Sector 1 of OPLD, while on clearance operation at Mudu town on May 24, neutralised 12 Boko Haram terrorist (BHTs).

He added that the troops also rescued 241 persons in captivity of the terrorists comprising 105 women and 136 children.

During the operation, four Boko Haram terrorists’ flags, one motorcycle, two bicycles, one amplifier and two sewing machines were recovered.


Enenche disclosed that a prominent Boko Haram fighter, Malam Adamu Yahaya, AKA Saad Karami, who led the last attack on troops in Baga town and participated in attacks on Metele, Mairari, Bindiram, Kangarwa and Shetimari (Niger Republic) also surrendered to troops of 242 Battalion in Monguno.

Another set of terrorists, including several suicide bombers, were also neutralized on Tuesday by the troops of 51 battalion.

According to him, the troops successfully neutralized the terrorists who were on 10 Gun Trucks attempting to attack the troops’ locations at Banki Junction and Firgi in Bama Local Government Area.