PROFILE: Ibrahim Gambari, the ‘diplomat by accident’ who hugged dictators for democracy 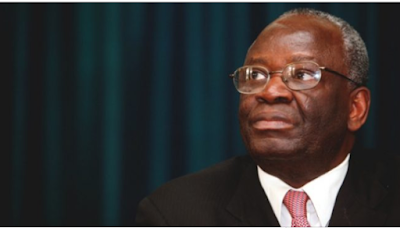 Ibrahim Agboola Gambari has always kept dates with history. In 1965, he had been spotted by some British teachers at King’s College, Lagos, where he did his A Levels. They decided to enrol him for his university education in the UK. His elder brother, Zulu Gambari, the highly influential emir of Ilorin from 1959 to 1991, had other ideas. He insisted his younger brother should attend the University of Ibadan (UI).

Off to UI the young Ibrahim went — but he spent exactly two weeks there, according to family members who spoke with TheCable.  His British mentors soon found out his whereabouts and took him straight to the London School of Economics and Political Science, one of the most prestigious institutions in the UK. In 1968, Gambari graduated with a degree in economics and international relations from LSE. He bagged a master’s degree in 1970 and PhD in 1974 from the Columbia University, New York, United States.

In 1984, another date was waiting in his diary. At 39, Gambari was appointed minister of external affairs by Muhammadu Buhari, a major general and military head of state. They worked together for 18 months, and Gambari had the arduous task of managing the fall-out of the botched crating and kidnapping of Umaru Dikko, the minister of transport in the overthrown civilian government of Shehu Shagari. There was a massive diplomatic row between Nigeria and the UK over the attempt to kidnap Dikko in London, with an Israeli security agent accused of working for the Nigerian government.

Buhari’s government was overthrown in 1985 and Gambari moved, but another date was waiting three decades later. After decades of journeying through the globe as a scholar and diplomat, Gambari has now been appointed by Buhari as chief of staff to replace Abba Kyari, who died from COVID-19 complications in April. As John Webster, the English dramatist quipped, “old friends, like old swords, still are trusted best”.

Born on November 24, 1944 into an aristocratic family in Ilorin, Kwara state, Gambari began life as a prince of the old emirate. He attended Provincial (now Government) Secondary School, Ilorin, before proceeding to King’s College.


If Gambari’s career trajectory could be described in two ways, he is first a teacher and then a diplomat. Yet, he is popularly known as Ambassador Gambari. He is the founder and chairman of Savannah Center External link, an Abuja-based think-tank for research, training and public policy debate on the nexus between diplomacy (conflict resolution), democracy and development in Africa. He was appointed the first chancellor of Kwara State University (KWASU) in 2013.

Gambari started his teaching career as a lecturer at Queen’s College, City University of New York in 1969 and later became an assistant professor at the State University of New York from 1974 to 1977. He returned to Nigeria to work as a senior lecturer at the Ahmadu Bello University (ABU), Zaria, in 1977, where he rose to become a professor in 1983. He was a visiting professor at the School of Advanced International Studies (SAIS) of Johns Hopkins University, Georgetown University and Howard University in Washington DC from 1986 to 1989. Gambari was also a research fellow at the Brookings Institution, Washington DC, as well as a resident scholar with the Rockefeller Foundation Centre in Bellagio, Italy.

In an interview with African Newspage, Gambari said he is more of a teacher than a diplomat.

“As I always say, I regard myself as a teacher by training and diplomat by accident, long accident, but nonetheless accident! In many ways, I have been privileged and with privilege comes a lot of responsibility,” he said.

DIPLOMAT BY ACCIDENT
In 1999, Gambari became the first under-secretary-general and special adviser to the secretary-general on Africa and served till 2005. In that capacity, he worked closely with heads of government, key policymakers as well as institutions in the continent to develop the New Partnership for Africa’s Development (NEPAD). At the same time, he acted as the resident special representative of the secretary-general and head of the United Nations mission to Angola. He was a delegate to the assembly of the African Union as a national delegate from 1984 to 1985 and member of the UN secretary-general’s delegation from 2000 to 2012.

From 2010 to 2012, Ban Ki-moon, UN’s secretary-general, appointed Gambari as the joint special representative of the United Nations-African Union Hybrid Operation in Darfur (UNAMID), usually referred to as the world’s largest international peacekeeping mission. In 1990, he was appointed as chairman of the UN’s special committee against apartheid for four years to coordinate eradication of apartheid in southern Africa. Gambari also served as Nigeria’s ambassador and permanent representative to the UN from 1990 to 1999.

“I was a minister at the age of 39, a civilian in a military government. I have worked with 7 Nigerian heads of state; there is hardly any Nigerian who is not a (career) civil servant who has worked with 7 heads of state! Shagari appointed me at the Institute of International Affairs; Buhari appointed me as a minister,” Gambari told African Newspage.

“Babangida appointed me as ambassador to the UN where I ended up working with Shonekan, Abacha and Abdulsalam Abubakar. At the UN, I worked with 4 secretaries-general: Javier Pérez de Cuellar, Boutros Boutros-Ghali, Kofi Annan and Ban Ki-Moon. I submitted my papers to Pérez de Cuellar in 1989.”


UN ‘FAVOURITE ENVOY’ WHO HUGGED DICTATORS
There are not many men who have proudly worked with dictators repeatedly and have been lauded and criticised for doing the same. Gambari is one of such men, who has worked with virtually every dictator in Nigeria, and rode on this record to persuade dictators around the world.

In 2010, Foreign Policy referred to him as “the United Nations sent its favorite dictator-whisperer”. He had sought peace with Zimbabwe’s Robert Mugabe, pursued the release of Aung San Suu Kyi in Myanmar, and taken on many of such arduous tasks for the UN.

In a bid to mediate for democracy in Sudan, Gambari attended the wedding of Musa Hilal, a tribal leader, to Cameroon’s strongman Idris Deby, in the company of the Sudanese dictator Omar Hassan al-Bashir. At this wedding, he is seen dinning and hugging dictators, which would later become a talking point for diplomats and researchers across the world.

Some say his friendship with dictators did not achieve the needed results, while others differ, claiming that the situation could have been worse.

MAN OF MANY HONOURS
With Gambari’s extensive and colourful achievement as a diplomat around the world comes with a myriad of accolades. He is a recipient of Nigeria’s third-highest national honour, Commander of the Federal Republic of Nigeria (CFR). In October 2012, former President Jacob Zuma conferred on Gambari South Africa’s highest national honour for non-citizens, the Order of the Companion of the Oliver R. Tambo (OCORT).

In 2007, he received the special recognition for international development and diplomacy award conferred by the Africa-America Institute. A year after, he was awarded the distinguished foreign service award by the federal government in 2008. Gambari also clinched the International House Harry Edmonds Award for Lifetime Achievement in New York in 2009 and the Campaign Against Genocide Medal by the Republic of Rwanda in 2010.

In 2002, he was awarded a doctor of humane letters (honoris causa) from the University of Bridgeport, Connecticut, and another from Farleigh Dickinson University, New Jersey in 2006. The ambassador extraordinaire was elected to the Johns Hopkins University Society of Scholars in 2002 and has since 2005 served as a member of the International Advisory Board of the Institute of Peace, Leadership and Governance at Africa University, Zimbabwe.

PROMOTING DEMOCRACY AND GOOD GOVERNANCE
As a research scholar with a plethora of published books, journals and articles on politics and international relations, Gambari has detailed the challenges with governance in Africa and global unrest. In his address to the civil society leaders’ stakeholders conference in Abuja in April 2018, Gambari emphasised on peace, democracy and accountability.

“Meanwhile, the growth of public corruption has continued in spite of the promises made by the Buhari administration to contain it. Indeed, corruption has become so embedded and systemic that it has become difficult for public institutions to execute their mandate as self-interest of officials overtakes the public good,” he said.

“We must keep our eyes on the ball, as the problem is not democracy but religious and communal violence, widespread corruption, and an excessive presidentialism amidst enduring poverty, unsustainable levels of unemployment among the youth, growing inequality.”

Given his wealth of experience, Nigerians are looking forward to his wielding such influence as the president’s gatekeeper in promoting good governance.


He is married and has children and grandchildren.