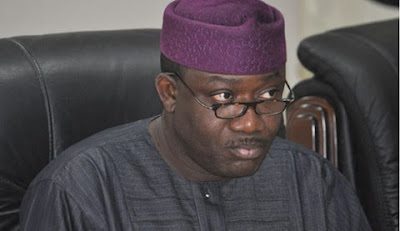 The Ekiti State chapter of the Peoples Democratic Party, on Wednesday, alleged that the Dr. Kayode Fayemi-led administration had sold the State Governor’s Lodge in Abuja.

Odeyemi, said this in a statement in Ado Ekiti. He claimed there was credible evidence to show that the property had been sold, adding that “Governor Fayemi must explain to Ekiti people why the building was demolished and a new structure being built on the land.”

He alleged that the Fayemi-led All Progressives Congress administration “got the state government to buy a property belonging to him in Abuja, to be converted to a new Governor’s Lodge after selling the one in Asokoro, Abuja.


The party scribe said, “Should spending billions of naira on a new Governor’s Lodge in Abuja be the priority of the same Fayemi’s government that sacked over 3,000 workers under the pretext that there was no money to pay them?

“Also, assuming but not conceding that the new structure with like 15 feet bunker is being built by the state government, what is the justification for pulling down the old structure and building a new one at this time? At what time did the former structure become dilapidated to warrant total demolition to pave way for a new one?

“It is therefore our demand that Governor Fayemi must explain to Ekiti people what happened to the multi-billion-naira edifice in Abuja.”

However, the state Commissioner for Works, Mr Sola Adebayo said, “We have heard about the allegation from the PDP. I don’t think we have any reason to rush in replying because there is nothing like fraud as regards the Abuja property. We will respond very soon.”