Palliatives should not be politicized – Foreign Affairs minister, Onyeama 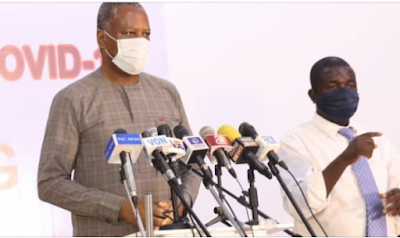 As Nigerians continue to groan over the hardship occasioned by the coronavirus pandemic, the Minister of Foreign Affairs, Mr. Geoffrey Onyeama has declared all forms of palliatives being distributed should not toe political lines.

He spoke on Wednesday, following the commencement of distribution of food items and provisions to particularly the needy and vulnerable in the 17 Local Government Areas of Enugu State by the Kwusike Foundation, founded by the minister.

Onyeama restated that his distribution of food and medical palliatives to the Government and people of Enugu State was without political consideration.

Special Assistant to the Minister, Chief Flavour Eze, explained that contrary to insinuations by some people that the relief materials were meant for members of the All Progressives Congress (APC), they were actually targeted at the poorest of the poor, with special attention to the orphanages, physically challenged and the old people’s homes.

Reacting to a video, which he said was being circulated in the social media by some APC members in the State that party people were not allowed into the Okpara Square, venue of the distribution, last Sunday, the minister’s aide wondered how the party members could have left their homes to attend an event they were not invited.

He described as fake news the rumour that party members were intimidated and assaulted, stressing that the highly restricted function was attended by representatives of the Enugu State Government and vulnerable groups and held under a very friendly atmosphere devoid of any bickering since there was no crowd.

Eze blamed some members of the party in the State for always labouring to paint the Minister with tar brush before the public.

“All the invited media houses and security agencies were there. It was a very peaceful outing and we observed all the stipulated COVID-19 protocols pertaining to social distancing; washing of hands, use of hand sanitizers and face masks.

“We didn’t invite party people because the palliatives were not meant for politicians or APC members; they were clearly for the less privileged people of Enugu State.

“So, I don’t know where they fabricated the story that some party members were denied access into the venue. May I on behalf of the Kwusike Foundation, reiterate that what we are giving out to Enugu people is not for political patronage, hence, could not be based on party or political considerations.

“In fact, the complete COVID-19 test kit, PPEs and other medical equipment donated to the State Government were for the benefit of Enugu people,” Eze stated.

The foundation had at a modest event with highest regards to the social distancing prescriptions and hand washing by the Nigeria Centre for Disease Control (NCDC) flagged-off the presentation of items at the Okpara Square, Independence Layout, Enugu.

Represented by a chieftain of the APC in the State, Deacon Okey Ogbodo, the Minister stated that the federal government had continued to do all in its ability to combat the pandemic, noting that the gradual easing of the lockdown was a clear indication that the efforts were yielding positive fruits.

He urged Nigerians to continue to show love and accommodate one another in these trying times, adding that the foundation would continue to “create smiles on the faces of vulnerable people”, adding that there was no better way of combating the virus than abiding by highest hygiene protocols.