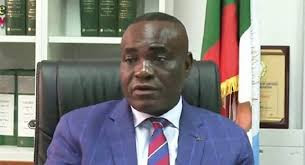 The Presidential Implementation Committee on Financial Autonomy for Judiciary and Legislature has told governors to comply with the Executive Order 10.

Signed by President Muhammadu Buhari on May 20, it mandates all States to, henceforth, include the allocations of the legislature and the judiciary in the first-line charge of their budgets.

The Order grants financial independence to them as against the previous practice which was widely condemned.

Now, Houses of Assembly and the judiciary do not have to be at the mercy of Governors for funds.

Enang, the Senior Special Assistant to the President on Niger Delta Affairs, said that Nigeria’s greatest challenge was wastage at the state level.

The aide said one important feature of the financial autonomy is that all the three arms of government will have full details of budget, allocations, income, expenditure and balances of accounts.

Enang said all arms will know how much each uses in settling salaries, allowances of officials, aides, office maintenance, among others.

The former Senator explained that the governors will no longer be solely “responsible for expenses”.

“So what the president is doing is to ensure that Houses of Assembly is independent not for the purpose of attacking the governors but for checking the executive and making government more responsible”, NAN quoted him as saying.

“The governors will know that the judiciary is independent and same with the legislature, these arms of the government need not to get approval from the governors in order to execute their respective duties”.

Enang added that the provision stipulated that the governors upon receipt of federal allocation and Internally Generated Revenue (IGR), must should remit the same to the respective arms.

“Where any governor fails to remit the money due to the arms, the Accountant General of the Federation (AGF) will deduct that amount standing to the credit of that state in the federation account and remit directly to arms concerned.”

He expressed confidence that none of the 36 states will deprive their state legislature or judiciary of the fund that is due to them.

Enag assured that the implementation committee will be conciliatory and respectful of the powers of each arm of government at the states level and the powers and privileges of the governors.

He advised all the arms of government in States to followed the practice, already in effect at the federal level, for proper accountability.

Last week, Abubakar Malami, the Minister of Justice, warned that the federal government would withhold funds of states that flout Executive Order 10.