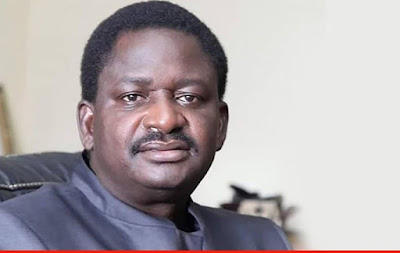 The Special Adviser to the President on Media and Publicity, Femi Adesina, has faulted those demanding that President Muhammadu Buhari should addresse Nigerians on the COVID-19 pandemic.

Adesina said this in an article titled, ‘If you can’t take blows brother, don’t throw blows’, which was posted on his Facebook page.

He said if it were former President Olusegun Obasanjo that was still in power, he would have insulted those calling on him to address them.

Adesina was reacting to the criticisms he received from a large section of Nigerians over his outing during a programme on 95.1 Nigeria Info FM Abuja.


Many Nigerians slammed Adesina for saying the fact that they voted for Buhari didn’t give them the right to order him around.

He wrote, “You know what? If it was former President Olusegun Obasanjo that had come under the ‘you must talk to us’ barrage like that, and on live television, he would have first cleared his throat noisily, adjusted himself in his seat, and then bellowed: ‘And who are you, that I must talk to you? I say who the hell are you?

“Who is your father? Who is your father’s father that you are commanding me to talk to you? Were you born when we fought a civil war to keep this country together? Where was your father when I received the instrument of surrender from the Biafra Forces? Don’t come here and tell me nonsense. Talk to us, my foot!

“But President Buhari would not upbraid anyone like that. He rather keeps his peace. And some people have now taken liberty for license, till they begin to sound like broken records. Yes, no apologies. That’s how they sound.

“The fact that you have voted a man into office is not carte blanche for you to lead the man around by the nose. A leader worth his salt would not even submit himself to such cavalier treatment. Definitely not President Buhari. I made that point clear on the programme.”

Adesina said he received numerous calls from relatives and friends home and abroad over his outing on the radio programme and was told how he was attacked on social media.

He said he would continue to defend the President as a spokesman but would not be compelled to answer questions which are not within his purview.

The President’s spokesman said his principal was not in the habit of talking too much, adding that the three national broadcasts he had done on COVID-19 should suffice.