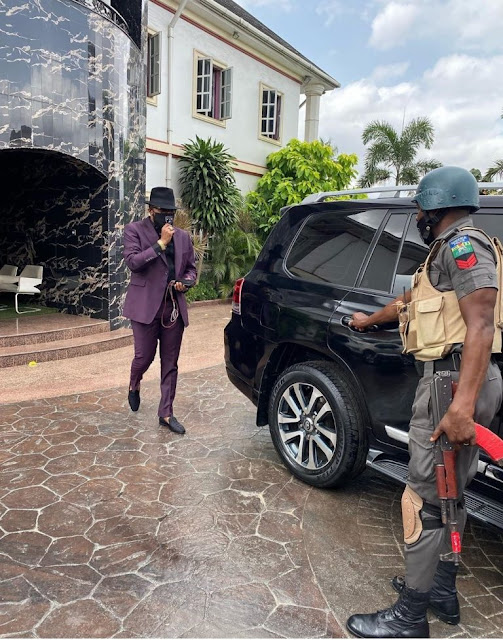 Nigerians on social media have reacted to the withdrawal of police escorts attached to Chairman, Five Star Group, Emeka Okonkwo alias E-Money, on the order of the Inspector-General of Police (IG) Mohammed Adamu.

The IG ordered the withdrawal of the six policemen from B operations, Command Headquarters in Lagos, following allegations of misuse of the escorts.

The business mogul and the younger brother of star artist Kingsley Okonkwo alias K-Cee had become the subject of a police investigation for his flamboyant lifestyle.

It was gathered that Adamu directed the Lagos Police Command to commence investigation into the young billionaire’s sources of income following allegations that he used his police escorts like domestic servants.

The policemen, said to be drawn from B Operations, command headquarters, were alleged to have reduced themselves to carrying umbrellas, handbags and even doing other menial jobs for E-Money and his household.

E-Money, the younger brother of music star Kingsley Okonkwo alias K Cee, was alleged to have turned the six policemen attached to him to domestic helps who run errands such as opening doors, carrying bags and other menial jobs.

The news elicited mixed feelings among Nigerians on social media with some accusing IGP of selective reaction insisting the many other VIPs were guilty of the same action. While some saw the withdrawal as a welcome development.


IG Orders For Probe of E-Money, Withdraws Six Policemen Attached to Him

IG has ordered the probe of the Chairman, Five Star Group, Emeka Okonkwo aka E-Money, over his flamboyant lifestyle

The Same Government who never investigate the money looted by the Northern politicians
1/2 pic.twitter.com/sg5FWd3mDn
— Elvis Chinedu (@ElvisChinedu12) May 12, 2020

I am not in support of E-Money using 6 mobile escorts; is he a bullion Van? However, lets be honest; @PoliceNG high hierarchy should be blamed — they wine, dine and collect huge amounts from these socialites in favour for dozens of Mopols as their escorts. pic.twitter.com/sWsSIAGLOr
— Pan African/Igbo (@KachiZone) May 12, 2020

trade is the sabotage of our economy. As you read this MC Oluomo has a Police Inspector as his Chief Security Officer with a retinue of other police men in his entourage. Tell me, what is Oluomo’s contribution to the economy and to society? Are the
— Mazi Gburugburu (@Mazigburugburu1) May 12, 2020

The withdrawal of E-Money’s security escort over such flimsy excuse as using the police men “for domestic errands”. Look, the IG should just tell us that he wants to renegotiate terms with the flamboyant young billionaire who I understand is generous with his money. I say this
— Mazi Gburugburu (@Mazigburugburu1) May 12, 2020

I don’t know who the young man E-Money is, I don’t roll in his circles neither do I belong there. However, I find it befuddling that the Police High Command would withdraw the security operatives attached to him. First, let me state herewith that I think it is crazy that
— Mazi Gburugburu (@Mazigburugburu1) May 12, 2020

IG withdraws E-Money’s 6 policemen. He was surprised police were attached to him & were being used as domestic servants, carrying umbrellas, opening doors & doing menial jobs for him.

Do not single out E-Money. Goose & Gander must be equal. Politicians are guilty of same crime!! pic.twitter.com/BOjwQUUpNF
— NEFERTITI (@firstladyship) May 12, 2020