Wednesday, May 13, 2020 CuteNaija 1 Nigerians in Diaspora 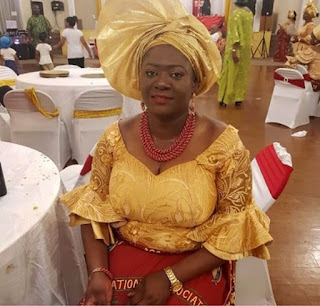 The certified nursing assistant was studying to become a nurse in the United States. Afuke’s exam was scheduled in June.


She also had completed the requirements to become a United States citizen and had an important interview in April that was postponed due to the emergence of the coronavirus.

Before she could reschedule it, the 35-year-old Chicago woman became another casualty working on the pandemic’s front line in the health care sector.

Afuke died April 29 at Stroger Hospital of pneumonia related to a COVID-19 infection.

She did not have a serious underlying medical condition that made her more vulnerable to the virus, according to the Cook County medical examiner’s office.

Her husband, JJ Afuke, said he believes Ijeoma contracted the virus while working for MADO Healthcare in Chicago’s Uptown neighbourhood.

The nursing facility had an outbreak of 50 confirmed cases among residents and staff and three deaths as of Friday, state public health officials said, citing the most current information available.

Afuke said his wife had complained about a lack of personal protective equipment at work.

He urged her to take a break last month after she came down with cold-like symptoms, but she brushed it off and continued to work.

He said she soon became too weak to walk up the stairs of their South Shore apartment.

Afuke said he also tested positive for the virus, but his symptoms have been less severe.

As he plans his wife’s memorial services for next week, the Lyft driver described his overwhelming grief. The couple has a daughter, Adaugo, which means “princess,” who turns 3 in August.

“I lost my angel,” he said. “She was a great mother, a great wife and an extraordinary human being. My wife is my superstar.”

He said Ijeoma immigrated in August 2015 to begin a new life with him in Chicago.

The two wed a few years earlier when he was in Nigeria for his father’s funeral. A mutual friend had introduced them.

She remained behind in Nigeria until 2015 while studying nursing and securing all the necessary paperwork to come to the United States.

She was from the state of Abia in the eastern part of the country. JJ Afuke’s niece said the couple’s bond was evident to others in the family despite their 27-year age difference.

“He was head over heels for her,” said Adaku Otuonye, of Lake Villa.

“For my uncle, she was God’s gift. She fulfilled him and was that missing part of him.”

Afuke said his wife was a nurse in Nigeria but had to complete the licensing process in the United States.

In the meantime, Ijeoma was working as a certified nursing assistant while studying for her licensing exam to be a nurse in June.

“She liked America and the opportunities,” Afuke said.

“She just wanted to pursue nursing and do the best she could. She was very smart, a go-getter and very ambitious.”

Afuke said his wife loved her job and was committed to her patients, even when she became sick.

“I told her to stop working, but she did not want to,” he said. “She wanted to keep helping people.”

He took Ijeoma to the hospital April 19. One week later, despite a persistent fever, he said she was stable and still speaking to relatives and friends on the phone daily.

Her April 29 death was unexpected, he said, and came suddenly shortly after she was intubated due to a fluctuating heart rate.

“Everyone was looking forward to seeing her be successful in America,” Afuke said of her family in Nigeria.

“I never thought she would die from this because she was very much alive and was talking to me and her friends all week.”

Afuke said the couple had hoped to have two more children.

He said his wife believed their gifted daughter would grow up to become a doctor and help others. He has not told her yet that her mother is dead.

He said the child has looked for her around their apartment and has asked, “Where is mommy?”

His niece, Adaku Otuonye, set up a fundraiser to help defray tens of thousands of dollars in medical and funeral expenses. It had raised $10,000 by Tuesday.

She said her uncle, who has self-quarantined, has not been able to return to work in weeks. She said Ijeoma’s job as a certified nursing assistance did not provide medical benefits.

“They really are the unsung heroes in health care,” she said of CNAs.

“These are people that pretty much have no insurance. Their families are mostly low income. It breaks my heart. She was one person, but many others also are losing their lives for so little. … She was just trying to find the American Dream.”