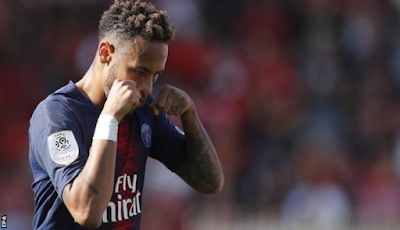 PSG star Neymar is doing all he can to engineer a return to Barcelona – including the rejection of a €100 MILLION bonus from the Parisians.

Mundo Deportivo says Neymar is refusing to enter new contract talks with PSG, this despite the offer of a €100m ‘signing-on’ bonus on top of an improvement of his current wages.

Instead, Neymar remains hopeful of returning to Barca this summer – and has let it be known he’d be willing to do so on his previous 2017 salary. Such a gesture would mean the Brazil captain accepting a greater than 50 per cent cut on his present PSG wages.

Neymar earns over €50m-a-year with PSG via wages and commercial agreements tied to the club.


With the French season now abandoned, Neymar remains in Brazil, where he has been residing in his mansion in Mangaratiba, in Rio de Janeiro, since March 14.