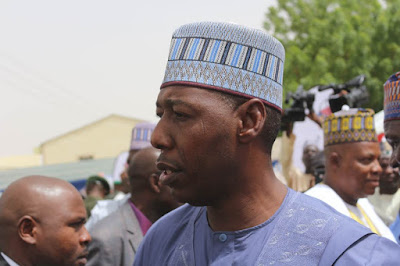 Borno State Deputy Governor, Umar Kadafur, has lamented that some citizens in the state doubt the existence of coronavirus, in the same manner, Boko Haram was initially underrated.

Kadafur, who is the Chairman of the state response team for the prevention and control of COVID-19 pandemic, stated this in a statement on Sunday.


The statement quoted him as speaking at a daily media update on the pandemic held at the Government House, Maiduguri.

He regretted that despite the increasing rate of spread of the pandemic, a large number of people in the state do not believe the existence of the virus.

He described as unfortunate how many people participated in burial ceremonies and observed congregational prayers against the rules of social distancing.

“When Boko Haram started, a lot of people felt it was something not to be taken seriously, until when it consumed everybody. This COVID-19 is another Boko Haram coming, and yet people don’t believe it’s real.

“I keep saying it’s real. As a response team we’ll continue telling the general public and reaching out with advocacy,” Kadafur said.

The Borno deputy governor noted that the state government was establishing another isolation centre in the state.