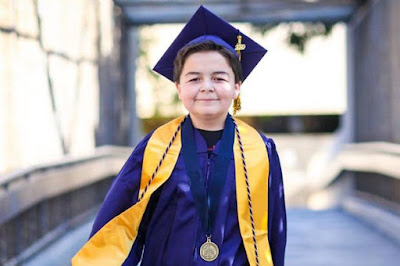 Jack Rico, a 13-year-old boy from La Mirada, has made history after graduating from Fullerton College in California with four associate degrees.

According to CNN, Rico’s feat — which took him only two years — makes him the youngest student in the school’s 107-year-old history to reach the milestone.

The young boy earned the associate degrees in history, human expression, social behavior and social science. He was also said to have graduated with a record 4.0 GPA.

Rico attributed his achievement to proper time management and listening to his instructors. He also said he has always craved to know more about different things in the world.

“I just love learning new stuff. I love knowing more about the world and all the different things we could study,” he told the media outlet.

Greg Schulz, the college’s president, said Rico’s intelligence — despite his age — makes him stand out among the school’s 21,000 students.

“It is not typical to have such a young student take classes, so Jack is pretty well known on the Fullerton College campus,” he said.

“Jack is wise beyond his years, and I’m so pleased that he found a home and place to excel at Fullerton College.”

Ru Andrade, Rico’s mother, also said the teenager has proven to be special since he was a kid. Andrade recalled Rico’s birthday request — a visit to the White House — when he was just four.

In an attempt to turn down the request, Andrade had told Rico she would take him there only if he could memorise names of all US presidents.

“I told him that was a really big trip for a three-year-old. Just kidding around, I said, ‘If you can memorize all the presidents, I’ll take you,” she recalled.

Andrade said Rico would, however, surprise her a week later, when he told her that he had learnt names of all the presidents, including the vice-presidents.

Rico will further his education after summer at the University of Nevada, Las Vegas, where he will be studying history.

At 13, the teenager said he has no specific goal in life yet but hopes to keep exploring things that interests him.

“I’m 13 right now so I don’t really have the whole life thing figured out. I’m still trying to explore my interests and learn what I want to do in life,” he said.