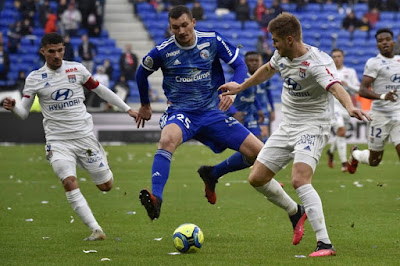 Lyon hit out at the French football league on Sunday for “suddenly” ending the Ligue 1 campaign, saying the decision could see the division slip further behind Europe’s top leagues and calling for it to be reversed.

The LFP ended the season last month with 10 rounds of matches unplayed due to the coronavirus pandemic, crowning Paris Saint-Germain champions and relegating the bottom two, Amiens and Toulouse.

Lyon, who have reached this season’s Champions League last 16, were left seventh in the standings and outside the European qualification places.

“Today, it is not only about OL, but quite simply about the future of French football,” the seven-time champions said in a lengthy statement.


“There is still time, until May 25, to back off and avoid a huge rout for the French championship.”

Lyon insisted they were not pushing so hard for a restart of the season for “OL’s exclusive interests” and claimed that French football could suffer short-term losses of 900 million euros ($987 million).

“How can we fight with our foreign competitors who, in the vast majority, chose to wait cautiously to restart their championship?,” continued the statement.

“How can we prevent the gap from widening further between French football and all the other major European countries?”

The German Bundesliga is set to resume next weekend, although the Dutch season has been abandoned.

Ligue 1’s revenue in 2018 was barely half the Bundesliga’s 3.2 billion euros, according to UEFA.

“The LFP suddenly decided to stop the French professional season definitively, without taking into account all of UEFA’s recommendations, or taking the time to observe what our dozens of neighbours were planning,” Lyon added.

Lyon hold a 1-0 first-leg lead over Serie A holders Juventus in this season’s Champions League last 16.

UEFA’s medical committee has said it believes restarting the campaign will be possible.