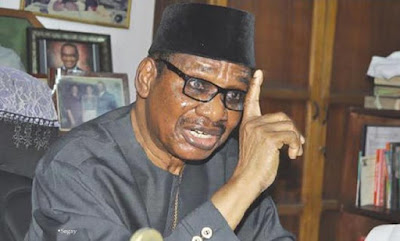 The Chairman of the Presidential Advisory Committee against Corruption, Prof Itse Sagay, SAN, has expressed his displeasure over the Supreme Court’s judgment nullifying the trial of a former governor of Abia State, Orji Kalu, and others, who were in December convicted and sentenced for a N7.1bn fraud.

Justice Mohammed Idris, who was elevated to the Court of Appeal bench, had returned to the Federal High Court in Lagos to complete the case, which started in 2007. The case was one of 36 pending cases in the lower court, which were completed by the judge.

Justice Idris sentenced the ex-governor to 12 years imprisonment for the fraud he allegedly perpetrated during his tenure as Abia State governor.

But in a unanimous judgment of the Supreme Court led by Justice Olabode Rhodes-Vivour, on Friday, the apex court nullified the entire trial, on the grounds that the constitution does not permit a judge elevated to a higher court to return to a lower court to conclude a part-heard case.


However, Sagay, while responding to the judgment, told our correspondent that no section of the constitution prevented a judge, who was promoted to a higher court, from continuing to hear pending cases in the lower court.

He said, “I think this judgment is a great disservice to this country. It’s a great setback because it drags us back into the iniquity of cases that have no end without any good reason at all.”

The constitutional lawyer noted that the Administration of Criminal Justice Act, 2015 allowed judges to continue with pending cases because of the “grave disadvantages” that had been noticed with regard to the interpretation of the Supreme Court.

“We found, in many cases, judges had spent up to five to seven years on a case, they were promoted and then they could not continue with it. A new judge would start and the case would begin all over again. It was killing our judicial system. That’s why the National Assembly passed that law under the ACJA.

“I’m not aware that the constitution specifically outlaws it. In my view, if the Supreme Court had interpreted that situation in that manner previously, that is interpreted to mean that, once you’re promoted, you cannot continue with cases in a lower court.

“(But if) the National Assembly then passes a law that grants the authority to that judge, I think the Supreme Court doesn’t have the power to insist on its own interpretation by referring to the constitution, which has no such provisions,” he added.