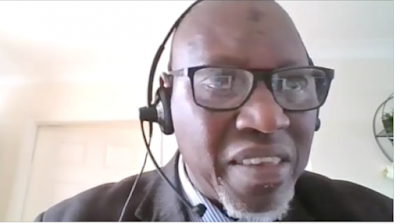 Moruf Adelekan, a Nigerian doctor based in the United Kingdom, has recounted his recovery from COVID-19 eight days after contracting the disease.

The consultant psychiatrist, who was confirmed to have contracted the disease on April 3, said he recovered after treatment in hospital with the aid of an oxygen.

He said before getting admitted, he got hydroxychloroquine sulphate and azithromycin which he took alongside “a lot of paracetamol and all sorts of combination” such as black seed oil and turmeric.

Adelakan, who was speaking in a video shared on Saturday by Taiwo Obe, a journalist, said he was experiencing rise in temperature, fatigue, loss of appetite and dehydration.

“At home, it could take me two hours to decide on whether or not to go to the toilet. I will get up and fall back again, sleeping,” the doctor said.

“I was not coughing but I had this bad pain if I tried to take a deep breadth. I was trying to get to the A&E (accident and emergency) but they were not admitting; I don’t think I was not meeting the threshold.”

Adelekan recalled his condition was getting worse and “my breathing was getting really bad” before he was finally admitted into the hospital.

“The treatment in the intensive care unit was generally supportive but the focus of treatment was to give me maximum oxygen over a period and they used CPAP (continuous positive airway pressure),” he said.

“They put it on your head as if you are going to the moon and you cannot come out of it for hours. It was the most essential treatment for me. I was on it for about 18 hours non-stop, I was getting oxygen full blast and that marked the beginning of my treatment.

“From the ICU, they sent me back to another ward where I spent not less than two days before I was taken off oxygen and discharged.”

On his lessons for Nigeria, the doctor said people must understand that “coronavirus is real and it is no respecter of anybody”.

“We need protocols on everything, and this should be no respecter of anybody. When I sneezed, the junior nurse who just became a manager did not spare me. She told me point blank, ‘you have to leave the ward and go home’,” he recalled.

“We need institutional support for those directly or indirectly affected. Even though I am NHS staff, then the government had identified those of us who are 60 years and above and they have given us 12 weeks of stay-at-home.

“The government should make available all the equipment, medications and the staff to do the work. Let us continue to mobilise support of all the communities to let people know that this is real.”