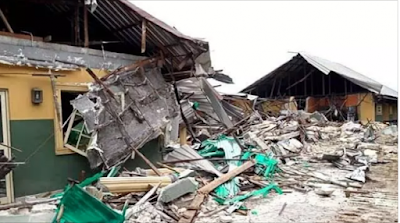 Promise Gogorodari, owner of Prudent Hotel, Eleme, one of the two hotels demolished by the Rivers state government, says he did not breach the lockdown order in the state.

On Sunday, Prudent Hotel, Eleme, and Etemeteh Hotel, Onne, were pulled down on the order of the Rivers state government for allegedly violating the lockdown measures in the state.

Nyesom Wike, the governor who supervised the demolition, had imposed a lockdown in the state and directed all hotels to suspend services immediately as a measure to check the spread of COVID-19.

He had warned residents that failure to comply with the order would attract stiff penalties.

But in an interview with The Punch, Gogorodari said he did not violate any law with his business to warrant the demolition of the property.

Gogorodari accused the government of not giving him fair hearing, and said no investigation was carried out before the demolition of his property.

The hotel owner said the incident has made his staff members lose their jobs, and that it is a negative development for investors in the state.

“I am based in Lagos but I am not in the right frame of mind to speak now. There is nobody who will not feel bad about this. It is a hotel that I built for the past seven years. The demolition of hotels is a setback to the state in terms of investment,” he said.

“That was an investment that was taking care of my family and relatives and people around me. There was no fair hearing before the demolition took place. With this, many people are out of jobs.

“I did not violate any order. The government was supposed to do some investigations before doing that. And if they found me wanting, then another procedure should be followed; not demolishing a structure like that.”

Tope Akinyode, human rights lawyer, had condemned the demolition of the hotels.

In a statement on Sunday, Akinyode faulted the governor’s action, saying it is unlawful.