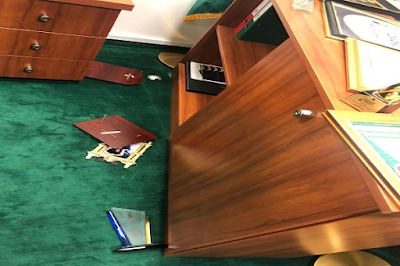 Spokesman of the House of Representatives Benjamin Kalu has raised the alarm over the safety of lawmakers at the National Assembly, saying the complex was no longer safe for them to work.

The office of Rep. Kalu located on the first floor of the new House of Representatives complex was broken into by unknown persons, who ransacked the whole office.

The incident left the place scattered while the door to the inner office was left unlocked.

It is not yet clear the motives of those who broke into and whether anything was taken away from the office but Kalu said he has reported the incident to the Head of Security in the National Assembly.


Kalu, who is the Chairman of the House Committee on Media and Public Affairs, expressed shock over the incident, saying it was evident that the National Assembly was no longer safe.

He said: “It is actually surprising to see that somebody broke into my office. We are still trying to access what the intention was in breaking into the office.

“Was it to take an important document out or to check if we left any valuable or money in the office or to plant any security or spying device inside my office?  I don’t know the reason.

“But I have asked my aides to register it with the Sergeant at Arms.

“I am sure the police here will do their investigations because this is scary. It is a committee office and this is happenings.

“This is one of the consequences of Covid 19 which made us not to sit everyday. When we were sitting everyday, we never experienced this. Hoodlums see this as an opportunity to break into people’s offices.

“We can’t break it down right now whether it was for stealing or whether to spy on what the National Assembly is doing through my office.

“Whatever it is, I am sure the Security agents will get to the root of it.”

Asked if the National Assembly was no longer safe especially for lawmakers, he said: “Of course. There has been lots of motions to that effect and discussions have been ongoing for sometimes that the place is no longer as safe as it ought to be.

“For my office to be broken into means that a lot. I don’t know how many offices have been broken into.

“But as the spokesman of the House, I need to speak out so that people should know. The committees in charge of security need to up their game.

“I am going to immediately get in touch with those in charge of that committee to see what they are doing about situation of this nature. It is actually shocking because we are not safe to do our job.”