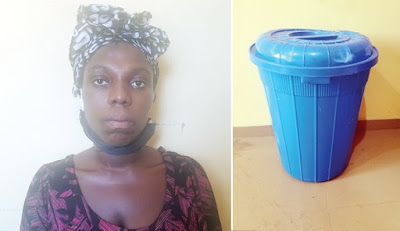 The Prisoners’ Rights Advocacy Initiative has called for the psychiatric evaluation and treatment of a 22-year-old mother, Oluwafunmilola Adisa, who drowned her daughter in a bucket of water at their place of residence on Plot 221 Gowon Estate, in the Ipaja area of Lagos State.

Similarly, the President, Nigeria Association of Psychiatrists, Taiwo Sheikh, said Oluwafunmilola should be sent to a psychiatric hospital so that her mental health could be evaluated.

It was gathered that Oluwafunmilola blamed her daughter, Oluwanifemi, for the hardship she had been facing after she gave birth to her 21 months ago, adding that her arrival cost her an admission to study law.

In a bid to alleviate her suffering, Oluwafunmilola said she drowned her baby in a bucket of water, adding that after committing the crime, she went to the Gowon Estate Police Station to report herself.


The Director of the PRAI, Ahmed Adetola-Kazeem, in a letter addressed to the Attorney-General and Commissioner for Justice, Lagos State, Moyosore Onigbanjo (SAN), stated that a clinical psychologist observed that Oluwafunmilola might be suffering from postpartum depression.

Adetola-Kazeem stated that the psychologist, Onyedikachi Ekwerike, who is also the founder of the Postpartum Support Network, in an assessment of the video interview of the suspect, said Oluwafunmilola displayed some of the symptoms of the postpartum disorder.

He urged the attorney-general to order a detailed psychiatric and psychological evaluation of Oluwafunmilola.

His letter read in part, “The news of the arrest of Miss Oluwafunmilola Adisa, who killed her one-year-old daughter, was brought to our attention by Mr Onyedikachi Ekwerike, a renowned clinical psychologist and founder of the Postpartum Support Network, an organisation that supports women suffering from postpartum depression.

“Mr Ekwerike urged us to appeal to you to be empathetic towards Oluwafunmilola rather than adopting punitive measures based on the very visible psychiatric conditions gleaned from her video interview with newsmen as well as the surrounding circumstances.

“From our analysis of the widely circulated video, it is clear that Oluwafunmilola ticks five of these boxes. Throughout the interview, Oluwafunmilola had a blank expression on her face. She showed no emotions and admitted to feeling nothing, even after drowning her child.

“She reports that she had repeated thoughts of harming her baby and waited patiently until her sister left for work to carry out her plan. Oluwafunmilola was also unable to respond emotionally to her child, which is seen in her description of the child’s death; the child was pushing against the bucket, gasping for air, but she pushed the child back in, feeling not the slightest remorse, and went ahead to report herself to the police – this does not seem normal. This also shows a lack of bonding with the baby, another clear sign of mental disorder.

“To this end, we request that Oluwafunmilola be provided access to mental health care. As an organisation, we advocate the mental well-being of moms, as we understand that pregnancy and childbirth can trigger mental illnesses.”

Sheikh, on his part, stated, “Based on the video of the lady, as a professional, I felt worried looking at her; her composure and lack of remorse clearly showed that she is not well in my own opinion. I feel very sorry for her. I feel the urge to do something to preserve her and save her from the sickness and further abuses.

“When someone is sick and is being displayed in public, so many other things go with it. One day, she will recover and people who saw her in that state will not know that she has recovered. The investigative team ought to have sent her for mental health evaluation. One is innocent until proven guilty.

“Keeping that young lady in police custody or in the prison could lead to further abuse, because we all know what happens in our custodial system. We can find a way to send her to the psychiatric hospital now for mental health evaluation and possible treatment, while the investigation is going on.

“Life is very sacrosanct; we lost one baby, we don’t want to lose the mother; so, we need to show some compassion and to rally around her to see how we can help her get out of this.”