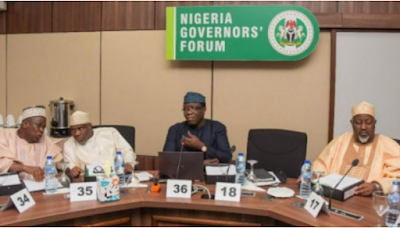 The Nigerian Governors Forum (NGF) has asked President Muhammadu Buhari to allow its members work out their own modalities on financial autonomy for the judiciary and the legislature at the state level, The Nation reports.

The president on May 22 signed the order granting financial autonomy to the legislature and the judiciary in the 36 states of the federation.

The order empowered the accountant-general of the federation to deduct funds for the state legislature and the judiciary from the federal allocations to the states.

“Based on this order, where any state of the federation fails to release allocations meant for the state legislature and state judiciary, the accountant-general of the federation shall authorise deduction of the money from source,” the order read.

According to The Nation, state governors faulted the approach of the president, saying it was unnecessary and unconstitutional.

It said Kayode Fayemi, chairman of the NGF, was nominated to meet with the president and Abubakar Malami, attorney-general of the federation, to relate the concerns of the governors.

“We mandated the NGF chairman, Dr Kayode Fayemi to have an audience with the President and Malami to avoid recourse to legal tussle on the interpretation of Section 121 (3) of the 1999 constitution,” the newspaper quoted a governor from the north-central as saying.

“We prefer dialogue to confrontation because we consider Executive Order 10 as unnecessary and an over-kill of the existing constitutional provision. You can see that in the last few days, AGF Malami has been trying to justify EO 10.

“And the NGF chairman on Thursday had closed door sessions with the President, where all the defects in EO 10 were spelt out.

“In another meeting with Malami on Thursday, the two parties agreed that some of the autonomy modalities were constitutionally flawed. The session reviewed the reservations of the governors.

“There will be a follow up with the AGF and minister of justice by the NGF legal committee comprising the governors of Sokoto, Plateau and Ondo states.”

“For a federating nation, there are so many extraneous clauses in EO 10 which are in conflict with the 1999 Constitution,” another governor was quoted to have said.

“For instance, Section 7 7(a) of the order made provision for a Presidential Implementation Committee to ensure compliance.

“For instance, in some states, there is already appropriation law for the state legislature and the Judiciary. Of what use is this E0 10 then?

“In most states, we have a joint account allocation committee. Are we saying that EO 10 is superior to a state’s law enacted by the house of assembly?

“Instead of rushing to issue EO 10, the appropriate thing for the Federal Government is to sit down with the governors and agree on autonomy modalities in line with Section 121(3) of the constitution.”