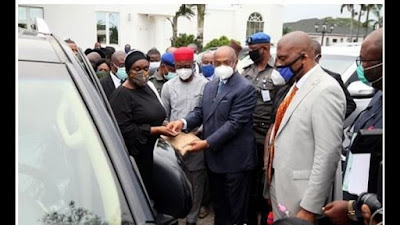 Governor Hope Uzodinma of Imo State has been applauded by the Executive Council of the State for motivating the state’s judges with car gifts.

The Council said on Wednesday after their meeting that the Governor has demonstrated the humanity in him and willingness to provide leadership.

They gave their nod to the purchase and donation of 23 Sports Utility Vehicles (SUVs) for the judges and another one for the newly elected Deputy Speaker of the Imo State House of Assembly.

Briefing reporters on the outcome of the meeting, the Commissioner for Information and Strategy, Declan Emelumba reiterated that the purpose of the car gifts was to motivate the judges and facilitate their job.


The commissioner said what was instructive was the ingenuity of Governor Uzodinma to source funds for the purchase of the vehicles from Internally Generated Revenue (IGR) base of the State.

Emelumba further informed that the vehicles were procured at the cost of N22million per vehicle as against the budgeted N37million per vehicle by the sacked government, and as such saved nearly ₦500 million from the cost of the 23 vehicles, adding that the Governor saved the state from unnecessary and frivolous financial waste.