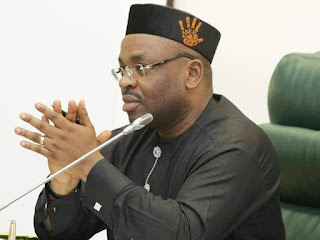 Akwa Ibom State Government has said it foiled an alleged plot to smuggle 68 suspected COVID-19 patients into the State.

The State Governor, Mr. Udom Emmanuel, disclosed this when he received the Akwa Ibom caucus in the National Assembly, who were in the State for a facility tour of the newly constructed Isolation Centre for Quarantine and Prevention of Infectious Diseases located at Ituk Mbang in Uruan.

Gov. Emmanuel said Intelligence gathering revealed that the suspects, who were from distant States, had liaised with some of their collaborators within, who encouraged them to come into the State and take advantage of the healthcare system made available for COVID-19 suspects and patients.

He said as soon as he got the information, he immediately used the police to block them.

Buttressing his claims, Emmanuel said, “I even have text messages where people were trying to communicate with their colleagues here and those their colleagues were encouraging them to move into the State, that here people are better treated, that they should also come. Guess how many they were trying to bring in. About 68 of them. So you can imagine if they were allowed to come in. So by the time the intelligence got to us, I had to also use police to block them. In the absence of that, I think so far, the curve has declined drastically.”

Governor Emmanuel said besides the case of the 68 suspects, some suspects who were also apprehended while making similar attempts through unconventional borders, had revealed they had information that once they succeed to enter the State and declare themselves to have symptoms, they will immediately be picked up and given exclusive treatment till they recover.

“Yesterday we got a call from one village in Etinan that somebody sneaked in from a State. Apparently the person had symptoms where he was and he just discovered that here people who had symptoms or tested positive are better treated. People even enter through water and when they come in, they declare themselves to be having symptoms so we can pick them up, give them the treatment because they are hearing the testimonies and even calling people to see what we are doing: the way we treat people here, the way we feed people there. Recall I had already said that where we isolate people should be as good as where any national assembly person should stay. So we have tried to make everybody comfortable,” he said.

The governor, however, condemned the attempt by people to invade the State despite agreement reached at the Governors’ Forum that interstate borders be closed to passenger movements in the meantime.

Speaking on behalf of the Akwa Ibom Federal lawmakers, the leader of the delegation and Senator representing Akwa Ibom North-west, Senator Christopher Ekpenyong, said the State representatives in the National Assembly were proud of the State Governor and commended his drive against COVID-19 in the State.

Ekpenyong said the Akwa Ibom National Assembly caucus was delighted at the level of work on the new Isolation Centre for Quarantine and Prevention of Infectious Diseases project at the Ituk Mbang.

He lauded the proactive disposition of the Governor in healthcare matters, adding that Udom Emmanuel, being at the saddle in a time like this is the best for the State.

He added that though Akwa Ibom had missed out a lot from the federal level in this season of the pandemic, apart from the rice given to the State which a good quantity was not good for consumption, yet the State had recorded success.

The lawmakers made a donation of N5 million to the State COVID-19 Management Committee, to support the provision of face masks for the people of the State. The donation was received by the Chairman of the Committee and Secretary to the State Government, Dr. Emmanuel Ekuwem.