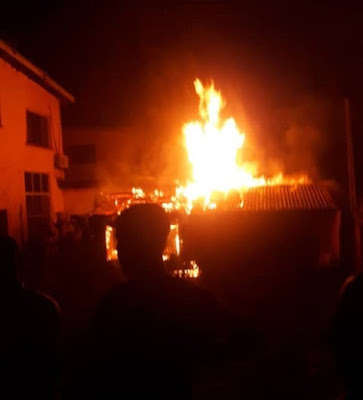 The tragedy occurred in the early hours of Saturday, May 30, 2020, when fire gutted Olaleye Market in Somolu, Bariga area of Lagos State in which several items and properties worth billions of naira were destroyed.

According to Oke-Osanyintolu, at press time, at about 8 am, though, no life loss, nor injuries recorded in the disaster, while efforts were intensified by emergency responders to ensure that the fire did not cause further havoc as well as curtail it’s spread to proximal buildings.

He added that properties and goods valued to worth several billions of naira were razed down in the inferno.

LASEMA boss explained, “LASEMA Response Team received a distress call from the control room as regards a fire outbreak at the aforementioned location and immediately deployed to the incident scene

“Upon arrival at the scene, it was discovered that Olaleye Market located at Shomolu was gutted by fire.

“However the investigation is currently ongoing to ascertain the cause of the fire.

“Lagos State Fire Service, LRU fire and the Federal Fire Service are currently battling the inferno and preventing it from spreading to other residential buildings

“No life was lost and no injuries sustained, but properties and goods whort several billions of naira is currently being razed down by the inferno” Operation ongoing.”

It was gathered that traders and property owners who raced to the scene to salvage some of the items during the raging fire were prevented by emergency response workers to avoid possible loss of life in the process.

Meanwhile, the victims were seen lamenting the situation and counting their losses.

However, at press time the cause of the inferno could not be ascertained.