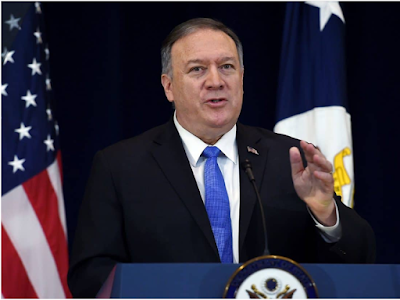 United States (US) Secretary of State, Mike Pompeo, on Wednesday praised Israel for sharing information during this global efforts to fight the coronavirus (COVID-19) pandemic and took another swipe at China over what he said was its lack of transparency.

that U.S President, Donald Trump and his senior officials had since engaged in a war of words with China, where the new coronavirus first emerged.

They said it failed to inform the world fast enough about the dangers it posed and frustrated those who raised the alarm.

However, China strongly denied the charges.

Pompeo told Israeli Prime Minister, Benjamin Netanyahu, on his arrival in Israel on a one-day visit, “you are a great partner, you share information.

“Unlike some other countries that try and obfuscate and hide that information, and we will talk about that country too.’’

NAN reports that Pompeo did not name China and did not give specific examples of Israeli cooperation in the fight against COVID-19.

Earlier, he repeated Washington’s charges against China in an interview for the Israel Hayom newspaper.

“Here is what we know for sure.

“The virus originated in Wuhan, China.

“The Chinese Communist Party knew about this virus in December 2019 and attempted to obfuscate this.

“They denied people the ability to talk, they didn’t share this information quickly enough, they created enormous risk for the world,’’ he said.

The U.S. has previously cautioned Israel against potential security threats from Chinese investment in Israel, prompting the Netanyahu government to set up a committee in October 2019 to vet such projects.

Israel, with a population of nine million, has reported 16,539 new COVID-19 cases including 262 deaths.