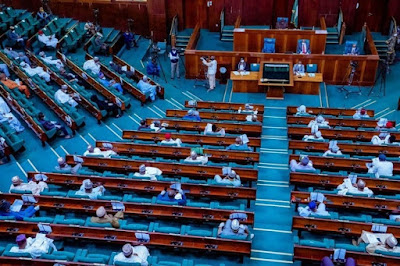 The House of Representatives, on Tuesday, set up an investigation into the alleged disappearance of an eighteen-member medical team of Chinese Nationals who were brought into the country in April by the Federal government.

The Minister of Health had on the 14th of May, told journalists that the Ministry was not aware of the whereabouts of the Chinese team.

The House mandated the probe of the whereabouts of the team, Tuesday, after considering a Motion brought on the floor by Rep. Dachung Bagos (PDP-Plateau).

The sponsor of the Motion recalled that on 3rd of April, 2020, the Federal Government announced that a 15-member team of medical personnel, comprising of doctors, nurses and other Medical advisers, arrived the country, along with a plane-load of additional PPE. On the 8th of April, 2020, a 15- member team of Chinese Medical Personnel arrived in the Country to share their experiences in fighting the COVID-19 pandemic and were received at the Namdi International airport, Abuja by some Government officials, including the Minister of Health.


“Also that the decision to bring in Chinese Medical Personnel into the Country, to help the fight against COVID-19 by Federal Government, sparked a lot of controversies from some Nigerians who kicked against the decision, saying that the Country has enough doctors and nurses, who are supposed to tackle the COVID-19 Pandemic”.

He said he was further aware that in response to the controversies, the Speaker, Rt. Hon Femi Gbajabiamila convened a meeting between the leadership of the House and Minister of Health on 7th April 2020, the Rt. Hon Speaker insisted that the Medical Team must undergo the necessary checks as provided by the NCDC and also go on 14 days Isolation before any interface with Nigerians, adding that, however “on arrival 0f the supposedly 15- member Chinese team Medical Personnel on the 8th of April, 2020, the Minister of Health inPess statement while welcoming them, told Nigerians that; first of all, what the Chineses Doctors will be doing Nigeria, is capacity building to add to the body of knowledge of Nigerian Doctors and experts have, because there is no expert who thinks he knows everything, every expert will tell you that there is more to know and there is more to learn, especially if you are hearing from those who have had past experience about it”, as he quoted the Minister as saying, ” the visit of these team is going to be very helpful to us and am sure the most curious of all persons should be our own Scientist who are having many questions and even these ladies and gentle men are are already in quarantine, I have requested that they will be able to connect With our scientists and dDoctors via teleconferencing, so we can start early to be able to ask questions and hear their narratives.”

The lawmaker said he learned that “before the coming of the Chinese Medical Team into the country, COVID-19 data stood at 254 confirmed cases with 44 successfully treated by the Nigerian Medical Personnel with only 6 deaths who, reportedly had other underlining ailments. Today the data stands at about 5959 cases with 182 deaths yet the nation has heard nothing as to the contribution of the supposedly Chinese Medical Team and their supposed medical expertise”.

The expressed concerns, that the Minister of Information reported in an interview with Sahara Reporters on the 4th of May, 2020, that the Chinese Doctors have started working in Isolation Centres, helping the country in capacity building, but the Chinese Foreign Ministry Spokesman, Zhai Lljian, said the Medical Team was sent at the request of the Nigerian Government who had voiced welcome and gratitude to China’s help”, but added that “contrary to the statement above, the Minister of Health on the 14 of May, 2020, in a new twist reportedly told News Reporters not to bother his ministry over the whereabouts of the Chinese Medical experts who came into Nigeria to support the fight against COVID-19, while responding to questions at the daily Presidential Task Force on COVID-19, the Minister of Health said the Medical Personnel are not guests of the Federal Government but CCECC, a construction Company”.

He said he brought the Motion, following the complaints and concerned of the Nigerian citizens, to duly investigate this issues as according to him, “it is our duty as Lawmakers and as representatives of our Constituents to protect the Nigerian citizens even while respecting or interacting with foreign nationals”.

The House adopted the Motion in its entirety, mandating the Minister of Health, to give a detailed full status report of activities of the supposed Chinese Medical Team to the Speaker, as agreed during there meeting of 7th April 2020.

The House also mandated its Committees on Health Services, Interior, National Security and Intelligence and Foreign Affairs, to investigate the reports of Chinese Medical Team were about and who they really are.