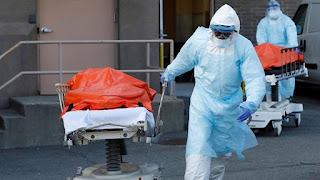 Britain’s death toll linked to the novel coronavirus has risen to 29,427, the government said on Tuesday, meaning it has overtaken Italy in recording Europe’s highest total.

The total includes only deaths reported through the Health Ministry following tests in hospitals and care homes, with many experts estimating that at least 40,000 people have died following infection with the virus.

An official report on Monday in Italy, which has recorded 29,315 deaths, suggested it could have a similar total to Britain.

Britain ranks fourth in the world for COVID-19 deaths per capita, behind Belgium, Spain and Italy, according to official totals.


The U.S., which has reported 69,079 deaths, has the ninth-highest per capita death toll, according to data consultants Statista.

Foreign Secretary Dominic Raab told reporters that Britain’s death toll from the pandemic was “a massive tragedy, something in this country, on this scale, in this way, we’ve never seen before.”

“In terms of the comparison (with Italy) … I don’t think we’ll get a real verdict on how well countries have done until the pandemic is over, and particularly until we’ve got comprehensive international data on all causes of mortality,” Raab said.

“(The death toll) is important … but I don’t think you can make the international comparisons reliably,” Raab said.

Britain’s Health Ministry reported another 693 deaths on Tuesday. Italy’s death toll rose by 236, according to the latest bulletin by the Civil Protection Agency.

Andrea Ammon, the director of the European Centre for Disease Prevention and Control (ECDC), suggested on Monday that Britain was one of four European countries that had seen “no substantial changes in the last 14 days” in the number of infections with the virus.

Many health experts have accused the British government of a slow response to the crisis and criticized the country’s low level of testing and the poor provision of intensive care beds, ventilators and protective equipment.

“The testing strategy has been non-existent,” Rosena Allin-Khan, an opposition Labour lawmaker and a hospital emergency doctor in London, said in the British parliament on Tuesday.

She said “many frontline (health) workers feel that the government’s lack of testing has cost lives and is responsible for many families being torn apart in grief.”

Hancock rejected Allin-Khan’s claims, insisting the government had overseen “a rapid acceleration in testing over the last few months.”