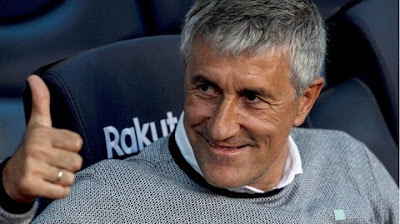 Barcelona coach Quique Setien says he would love to coach Neymar and would be “delighted” if the Brazilian returns to the club from Paris Saint-Germain.

Barca tried to re-sign Neymar last year but were unable to agree on a deal with French champions PSG, whom he joined for a world-record fee of 222 million euros ($264 million at the time) in 2017.

An agreement may even harder to strike this summer given the financial implications of the coronavirus pandemic, although reportedly Barcelona could offer players in exchange.

“I would love to be able to coach him someday,” said Setien, speaking to beIN Sport on Friday night. “We are talking about an exceptional level. Fortunately, I have already fulfilled one of my dreams, which was to coach (Lionel) Messi but I would be delighted if Neymar comes.”


Neymar previously formed a successful attacking trio with Luis Suarez and Messi at Barcelona but the future of Suarez is uncertain.

The 33-year-old has not played since January when he underwent surgery on an injury to his right knee, and Setien admitted he needs more time to regain full fitness with La Liga due to restart from its coronavirus-enforced suspension in the middle of next month.

Asked if Suarez was fully fit, Setien said: “No, I think he’s in a good condition and has been working with the group. But we see that he lacks a bit of confidence.

“He underwent an operation and after two months I would say he’s still recovering. But it’s clear that soon (he will be ready), I don’t know whether it will be two, three or four weeks.”

Barcelona sits top of the table, two points ahead of Real Madrid.

La Liga president Javier Tebas has said the preferred date for the season to resume is June 12 but the restart will depend on the Spanish health authorities.