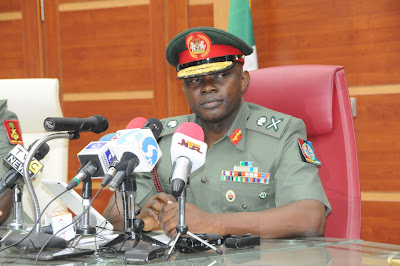 The National Industrial Court (NIC) has ruled that a contempt of court charge be filed against the Chief of Defence Staff (CDS), Gen. Gabriel Abayomi Olonisakin, over the alleged refusal to comply with valid orders.

Olonisakin may be committed to two years imprisonment if found guilty.

PRNigeria reports that the leave to file the charge was granted to Lt-Col. Abdulfatai Mohammed by Justice Sanusi Kado of the NIC, following the Nigerian Army’s refusal to reabsorb him as ordered two years ago.

The court had, in a judgment by Justice Edith Agbakogba, directed Olonisakin to convey the order for a review of the plaintiff’s retirement in writing to President Muhammadu Buhari.

Mohammed and Ijioma were among the “Army 38”, senior officers retired in June 2016.

Justice Agbakogba voided the retirement on the ground that it was not in accordance with the law.

The court noted that the plaintiff was neither indicted for any offence nor issued a query; that he never faced a panel or a court martial.

Justice Agbakogba held that Mohammed was denied fair hearing by the Nigerian Army before he was kicked out.

His lawyer, Abdul Muhammed, said: “The development was unfortunate considering that he was a Commanding Officer in the North East, risking his life for his country. His Commander-in-Chief and nation failed him by never responding to his cry whether for good or bad”.

Muhammed stressed that the Harmonised Terms and Conditions of Service for Officers (THACOS) provided a right of review.

He lamented that “some members of the Army 38 had submitted letters for review through the CDS but received no proof that those appeals were indeed transmitted to the President for his consideration”.