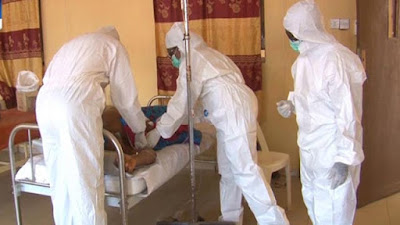 A title holder in the Adamawa emirate has died of suspected COVID-19, causing anxiety within the palace in Yola and the rest of Adamawa State.

It was gathered Saturday morning that Ma’aji Adamawa, Rufai Ahmad Duwa, died on Friday at the Federal Medical Centre (FMC), Yola, after battling symptoms believed to be those of COVID-19, and was buried Friday evening in Yola town, Yola South LGA.


Sources at the FMC disclosed that considering the symptoms he was manifesting, the hospital took his samples for COVID-19 testing and was placed under surveillance.

The sources said even family members were prevented from having contact with him.

The hospital was said to have monitored and ensured that safety rules were observed in the course of the funeral prayer conducted for him at the hospital premises.

”People were asked to stay far away from the ambulance carrying the corpse and the medical personnel who prepared the corpse all wore protective gears.”

The Information Officer of the FMC Yola, Mohammed Dodo, played down the COVID-19 ‘speculation’ but admitted that the deceased’s blood sample had been taken for testing and the result was being awaited.

If the tests come out positive, many contacts of the deceased may be quarantined.