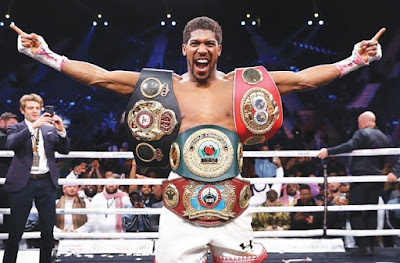 World heavyweight champion Anthony Joshua has been ranked the second-richest sportsperson in the United Kingdom.

In the ranking done by The Sunday Times, Gareth Bale was rated the richest young sports star.

However, Formula 1 driver Lewis Hamilton was ranked the richest sportsperson in the United Kingdom with a net worth of £224 million.

Apart from Joshua, others on the young sports stars Rich List are footballers who are aged 30 or below. Among them are Bale, Paul Pogba, Kevin de Bruyne, David de Gea, Raheem Sterling, and N’Golo Kante.


Joshua reportedly earned an estimated £78 million from his two fights with Andy Ruiz Jr last year, taking his net worth to £107 million.

Anthony Joshua reclaimed his titles from Andy Ruiz Jr, a Mexican boxer, six months after the Nigerian-born-boxer lost the titles.

The British boxer was born to a Nigerian-Irish father, Robert Joshua, and a Nigerian mother, Yeta Odusanya.

Joshua’s father (Robert) is the grandson of one of Sagamu’s greatest men and late patriarch Omo-Oba Daniel Adebambo Joshua, who was born in 1882.

Bale had in 2016 signed a contract extension with Real Madrid until 2022 that will make him earn £115m over the next six years in salaries and bonuses. He is estimated to have a net worth of £114 million.

Bale joined Real for a then-world record fee of just over €100m from Tottenham Hotspur in 2013. But the figure was eclipsed by Paul Pogba’s €105m move to Manchester United in August.