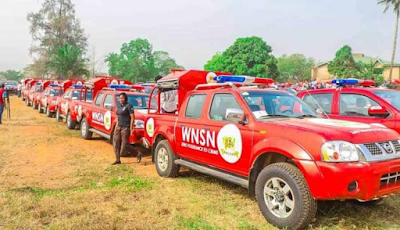 The leader of the gang, Sola Taiwo, two other members and their spiritualist were accused of attacking the house of a resident about two weeks ago and stealing many items, including a mobile phone.

The Director-General of the Amotekun Corps in the state, Mr Amitolu Shittu, who confirmed the arrest of the suspects, told our correspondent that his men were able to get Taiwo when he refused to pay a commercial sex worker after a romp and the lady seized a phone from him.

Shitttu said after the sex worker was apprehended, she was asked to call the suspect to come for the phone.


He stated, “The ring leader of the gang is Sola Taiwo, aka Shadow. Amotekun undercover agents had trailed him for about two weeks after his gang successfully burgled a house in Ila Odo.

“Taiwo had visited a sex worker and after a romp, he refused to pay her and the lady seized a phone he stole at the house he burgled a few days earlier.

“Our men got the sex worker and asked her to call Taiwo for him to come for the phone. Our men eventually arrested him when he showed up to collect the phone.

“He later led us to two other members of the gang namely, Samson Adedokun and Kazeem Saka. We also arrested one Rafiu Azeez, who is their herbalist. All the suspects except the herbalist were known as tailors in the town, but they are armed robbers as well.”

Shittu said items recovered from the suspects included an android phone and many charms.

He added that the suspects had been handed over to the police for further investigation.