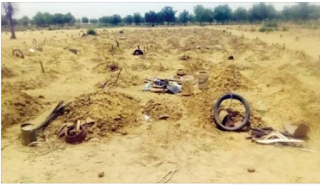 Although the deaths have not been linked to COVID-19, the unusual occurrence in the area was said to have caused apprehension among residents.

Since the COVID-19 pandemic, strange deaths have been reported in various states, lately Bauchi, Kano and Jigawa

The Nation quoted a cemetery worker as saying one of the burial grounds — Mamman Ali graveyard along Gashua road — has received 48 bodies.

The attendant whose name was not disclosed said: “We don’t know why people are dying like this. We too want to know what the problem is but we don’t know. We want the government to find out and tell us what is happening.

“But it is only journalists that are calling us and asking us questions. No government official has come to the grave yard to ask us anything.”

He reportedly listed other graveyards where the bodies have been buried as NEPA where seven corpses were reportedly buried; Garin Jaji, eight; Gishua Dabua, six; Bayin Asibiti, four; in addition to 10 other graves dug by the Mamman Ali cemetery.

Mohammed Gana, Yobe commissioner of health and vice-chairman of the state COVID-19 response team, said the deaths were being investigated.

“People die due to various causes; we may not say it is coronavirus,” he was quoted as saying.

“When this kind of thing happen, we have our standard way of doing things. We have sent out a team to go to the local government to establish that these deaths are happening and the causes.”