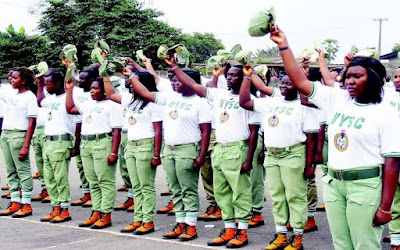 In Ondo State, five corps members will repeat the service over alleged abscondment during the service year.

Nine other corps members also had their service year extended as punishment for indiscipline and misconduct.

The state coordinator of the NYSC in Ondo State, Mrs Grace Akpabio, disclosed this while speaking at the passing out of the 2019 Batch ‘B’ (Stream 1) corps members in Akure.


She announced that out of 1,609 corps members due for pass out, only one of them merited the state honours award while 100 received commendation certificates.

In Katsina State, seven corps members will repeat their service year for allegedly absconding from service.

The state Coordinator, Alhaji Ahidjo Yahaya, made the disclosure on Friday while monitoring the collection of certificates by members of 2019 NYSC Batch B, Stream 1. They are 1529 in all.

Yahaya said the six corps members absconded from the service; hence the punishment.

He also revealed that eleven other corps members “will have their services extended for committing various degrees of offences as they contravened the NYSC bye- laws.”

Meanwhile, in Ogun State, 28 errant corps members of 2019 Batch B, Stream I, were sanctioned with extension and remobilisation of service.

The NYSC coordinator in Ogun State, Dr Belinda Faniyi, disclsosed this on Thursday during the passing-out of the corps members in Abeokuta.

Faniyi said 4250 corps members had been discharged after observing their one-year obligatory national service in the state.

In Kebbi State, the Coordinator, Alhaji Mustapha Mohammed, in his farewell address to the outgoing corps members, disclosed that eight corps members had their service year extended while two would repeat the entire service year for contravening various rules and regulations of the scheme.