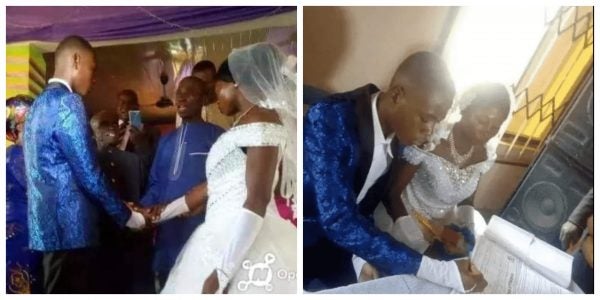 According to reports, the wedding ceremony held on Sunday 26 April 2020 in Amaiyi Igbere in Bende L.G.A of Abia State.

Reports also have it that Samuel is the only son of his late father Mr. Abraham Onuoha, who died in 2010.

The villagers revealed that they were surprised when the minister in charge of Assemblies of God Church Amaiyi Igbere announced the wedding, saying they were still thinking of the reason for the marriage.

They believe the boy is too young to be getting married and also concerned about the lady’s age who is 7 years older than the teenager.

His mother also revealed in an interview that she was forced to accept due to the condition of her husband’s family.