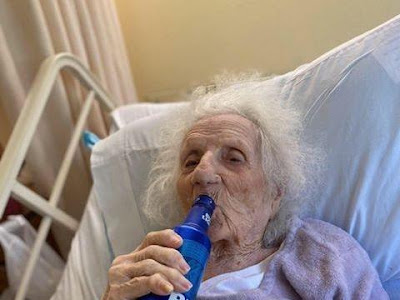 Jennie Stejna, a 103-year-old woman from Massachusetts, has celebrated her recovery from COVID-19, the disease caused by coronavirus, with an ice cold beer.

According to TMZ, Adam Gunn, Stejna’s grandson-in-law, revealed that the centenarian was diagnosed with the novel disease three weeks ago after which she took ill.

The development, Gunn explained, left members of her family unsettled with fears over her chances of surviving the virus.

He added that Stejna was the first to test positive for the disease in her Wilbraham nursing home, which led to her being isolated from others in a separate facility.


He said due to her worsening condition, Stejna’s family members were called to give her what could be their final goodbye words.

The grandson-in-law also recalled once asking Stejna if she was ready to go to heaven and that she replied “hell, yes!”

But on May 13, Gunn got good news that Stejna had recovered from the virus. To celebrate her recovery, Stejna’s nursing home staff at the Life Care Center in Wilbraham had gifted her an ice-cold beer.

In the less-than one minute video of her shared online, the grandmother, who was helped by staff of the center, can be seen tipping the bottle of the Bud Light before gulping part of the drink.

The excited woman was heard saying “cold,” after sipping the beer for the first time.

Stejna, a die-hard fan of Boston Red Sox, an American professional baseball team, lost her husband in 1992 at the age of 82.