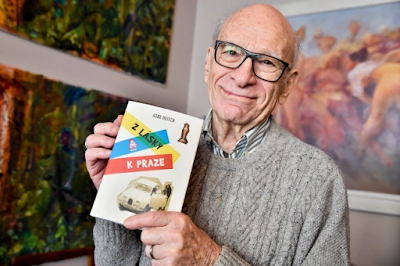 Gene Deitch, an American-born Czech illustrator and animator is dead. He died at the age of 95.

According to Associated Press (AP), Petr Himmel, his Czech publisher, who broke the sad news, said the film director died “unexpectedly” at his home in Prague on Thursday night.

Hummel, however, did not provide further details about Deitch’s death.

Deitch, however, began his foray into animation proper in 1955, after he took a apprenticeship at the animation studio United Productions of America (UPA).

He would later become the creative director of Terrytoons, where he created several characters including Sidney the Elephant, Gaston Le Crayon, and Clint Clobber and had continued to blaze the trail until his demise.

His successful career saw him won a host of several awards including the Academy Award in the ‘Best Animated Short Film’ category in 1960.  He also snagged the Winsor McCay Award for his lifelong contribution to animation in 2004.

Deitch is survived by Marie, his first wife, whom he married in 1943 and their three sons from the union — Kim, Simon and Seth respectively.